I have the feeling that the 2016 Top 10 just about came out. But time does move fast when you are having fun. And we now need to attack the 2017 Top 10 quickly, lest another few months go by.

Methinks that the records retained in 2017 were not as blackened as in former years. Instead, we found a fair share of interesting progressive and avant-garde records that bubbled to the surface. Many bands also engaged in all flavors of ‘post-rock or metal’, and those – I admit – delivered the best quality stuff, in general. In other words, those outfits striding across the mighty genre list without sticking to one were the most successful. And we got them from unexpected places sometimes.

So, let’s see what juicy record really cut deep and made it onto the 2017 Top 10 Records.

This is the album that followed me around like a curse – no pun intended. It dared inject its strangely folksy melodies into my thoughts at any untoward moment. This is another band defying styles and going their own route. And for cause. The record boasts an intoxicating mix of hard, power-infused metal, blended with Spanish vibes and Celtic Folk Metal undercurrents. The band hails from Bilbao in Northern Spain and not – as one would suspect – from further North. Their garage band flavor really added to the overall allure that this band perpetually extends. If you want to explore something off the beaten metal track, then Incursed might just be the medicine you need. And their tune will follow you around, make no mistake.

Power Metal is good – most of the times. And it comes in all types of flavors. You get the screechers, the funny bones and those lost in symphonics. And then you get progressively tainted Power Metal. Lör is one of them. They take you on wild, brickwalled rides through their mystical landscape at breakneck speed. With the exuberance of the young and a reckless trait to boot. But the outcome is pretty noteworthy. With a mix that meanders through styles, progressive offerings and metal flavors of all kinds. A very complex, but extremely juicy chunk of highly refined steely ore. Recommended. 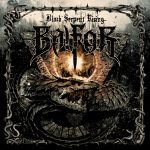 The Ukrainians from Balfor really put the pedal to the metal with their 2017 Black Metal offering. Their refreshingly unholy approach to the genre really got my attention. And be it only that they somehow acted as flame bearers for a genre that slowly, but surely is being eroded from the goat-infested heights these bands were on before. They clearly take their bearings from the black and mighty out there. The ones that came in from the North, but lost in power over the years. But the ensuing mix is most definitely their own pot of mighty pottage. If you are into Black Metal, Balfor is definitely a band you ought to check out. 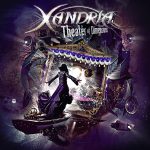 If you look for an established Symphonic Metal band that pulled out all the stops to rocket back up the chart list look no further than Xandria. I won’t hide my surprise with them coming in at such a high level of new found quality. Whilst the album ails from the usual faults the whole genre does, they inject enough innovation and tastefully arranged Power Metal to make a difference. And let’s face it: Their genre really is a difficult one to get the wow effect. And I dare the other big players in this special corner of the metal multiverse to top this album. Let’s see what we will find in 2018 on that front.

Any theme covering a whole range of gods and deities – imagined or not – is a difficult one. Usually one would expect down-in-the-pit Black Metal that – after a while – will beat you down onto the ground. Yet, Reign is an Extreme Metal record with an extraordinary progressive flavor. The alternation between clear voice, acoustics, and real harsh Extreme Metal flavors really keeps the earphones glued to your head. This is not something we often heard so far. Sons ov Omega created a sound that perfectly describes these entities and the bleak, cold landscapes that go with them. A tasty morsel of steely metal. You should get some, too.

When I was digging about the backlog late in ’17, Skein and their newest album fell into my lap. And I am glad it did. Their avantgarde-esque approach to metal really makes this record stand out in more ways than one. Skein‘s metal diet is a sturdy one. Gallivanting about a number of metal styles, they impress with excellent song-writing skills and savoir-faire. A tune with some sort of an uneasy groove that continues to captivate until the album teeters out. Indeed, this record lets many of their brethren in the metal multiverse look amateurish in comparison. Skein pretty much impressed the RMR deck crew too, and this is a feat not easily mastered neither.

#4 Sorcerer – The Crowning of the Fire King

I admit. We were late, so late to capture this record and write a few words in its favor. The Swedish band Sorcerer really pulled out all the stops and added another layer of goodness to an already cool first full length album. Delivered in their unmistakable style, this is a Doom and Heavy Metal record I can hardly find fault with. Make no mistake, the style is nothing new, but the execution exceeds expectation. As the business nerds like to say. I enjoyed the record from beginning to end. And this record still plays often on all devices. One of the rare records that got a straight ten for their pains.

If you look for the epitome of Extreme Metal, look no further than Dodecahedron. Totally dissonant, this album takes you to rock bottom where these razor-sharp, icy metal shards were invented. You know, the ones that continue to rain down on you for the duration. Kwintessens boasts real metal, not the weakened state some of the more established genres find themselves in. And they do this in a mind-numbing assault of 41 minutes that you must endure. Because for all the chaos, the skill and musicianship are outstanding. Paired with a coherence of the story – in this confusing scene of competing metal elements – that continues to amaze.

Chrigel Glanzmann is gonna hate me. I can enthusiastically declare that Eluveitie should be a traditional Folk Rock band. Or simply go for folk. If they want to call it pagan or otherwise is really of no importance. Evocation hit us like a bolt of lightning out of the blue. Everyone expected some dreadful repetition of more of the same growly metal the band dispensed over the last few records. But we were greeted with a refined, unplugged set of folk tracks that are up there with the best in the Pagan and Celtic Folk genres. On top of all, they did this with a fairly new crew, delivered in a dead language. Kudos! Now I hope that the next Folk Metal album will be as interesting and noteworthy as this one.

This record was, without doubt, the surprise of the year. A little known band from Israel usurped the mighty RockmusicRaider sound system for weeks. Which means that their pretty unusual, somewhat stubborn and unique brand of Progressive and Symphonic Metal really hit dead center on our music detection radar. The way these guys use complexity as a weapon instead of as obstacles has rarely been seen this side of the Jordan River. To top it, they master the integration of orchestral elements and the dreaded choir into their metal in a way that established Symphonic Metal bands still struggle to achieve. So, I can enthusiastically declare that Scardust made it to the top of the 2017 Top 10 Records. Deservedly so. Well done guys, I hope you go far.

And an honorable mention on the 2017 Top 10 Records goes to:

Cradle of Filth – Cryptoriana – The Seductiveness of Decay

You won’t get Cradle of Filth to budge and move into another direction than following the path of their established trademark. And Cryptoriana is no different. Yet still, this album struck the RMR offices as sufficiently distinct to elevate it onto some sort of podium. The record is one of the best pieces Dani Filth ever wrote. And also executed in a savvy, baroque and VERY Gothic way. This selection of Victorian scenes in all their gory glory is not something we encountered in just that way in the past. And it is this switch to the Gothic Metal realms that rendered this album thoroughly enjoyable. Despite Dani’s penchant to frequently emanate high-pitched screams at no notice.

In many ways, 2017 was filled with mostly unknown bands that somehow arrived on the scene with a vengeance. Many stepped away from traditional genres. And – rightly so – went their own way. The Swiss Infinitas got our attention via this strange ménage-à-trois of Thrash and Heavy Metal with a heavy dose of Folk Metal. They deliver this record through a story-lined theme in a quirky, energetic and somewhat unorthodox fashion. And don’t we like stories here in the RockmusicRaider officescape.