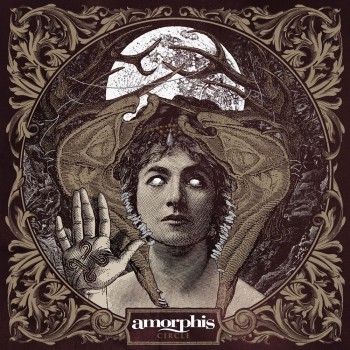 It is the Amorphis trademark sound alright, no doubt about it. But I am still confused. Circle, the 11th studio album of Finnish metal artists Amorphis showcases its pockets of excellence very well. Actually many of them. But then also lots of elements that absolutely make no sense to me. And you just ask yourself: Quo Vadis, Amorphis?

Okay, it may very well be – as it was opined by some of my co-reviewers – that the band has been on the lookout of a different, more unique sound. Somewhat confirmed in their follow-on album Under The Red Cloud in 2015, where they managed to kick it up a few gears and add some additional juice to their tune.

Circle should have been a quick, down and dirty piece of music. Nine short tracks, direct and powerful – brutal. But somehow it feels like Amorphis delivers a mixed bag to us. Like an identity crisis of sorts. The album feels like half conquered land, music elements delivered in disconnected patches, scattered around the countryside. It is like they got themselves a bunch of weak song structures to start. And then – all of a sudden – they remembered that them tracks craved some more beef and off they go with a vengeance. This is almost eerie in a way: Some tracks start well, then go mainstream on ye. Just to take off with some stellar riff, rhythm or melody towards the middle.

The album opens up pleasantly enough with some relatively rough metal with Shades of Grey (no, not the 50 ones…). Somewhat reminiscent to what you find on Moonspell’s Extinct in structure and sound in the beginning. But the tune quickly turns into typical Amorphis fare. This track is well paced, reasonably complex, with changes of tempi and an interlude in the middle that spices things up some. Not bad.

But then it comes: Mission – the second track of Circle – starts promising enough with a keyboard intro that makes you yearn for some metal surely to come. Just to have everything descend into something The Rasmus could have produced. Same structure and same friggin’ disco sound.

Up to the middle or so to be precise. And now this: Pocket of excellence! A very decent solo takes off towards the end. And it really turns the somewhat morose direction this song took before this happened.

The third track on Circle called The Wanderer displays some more juice than before. Again fast paced and well structured, this one packs another solo again towards the middle of the song itself. But for the rest of it, whilst not bad, I am missing the spice.

Then Narrowpath gains some more momentum clothed in a somewhat typical Folk Metal style robe. And again, the track displays a pretty good solo somewhere towards the middle. Yet, this is probably one of the best tracks on the album. This pattern is prevalent throughout the record. And this does not necessarily improve the quality of the song-writing.

Jethro Tull is beckoning us with some flute interlude in Nightbirds’s Song. The song starts with crunchy Melodic Death Metal to transform into some atmospheric flute sounds in the middle, then returning to Melodeath for the home run. A few surprises here and there and for sure not what you expect to get in the end. My favorite song on this album.

And here to one track with an atrocious start – Into the Abyss – where I stopped listening after the first few seconds. Only to be reminded that things can improve with age. And they do big time in this track. Kind of repetitive at first, the song gathers momentum. The icing on this metal cake is the keyboard AND a guitar solo in the middle. With a typical Amorphis final to boot.

The strongest piece on Circle – Enchanted by the Moon – graces us with a presence not yet known in this album. The band surprisingly put it on the second before last, which does not cease to amaze me. Powerful guitar work, Death Metal growls, crunchy lyrics. And frequent changes of tempi and theme  – you got it all. Stellar.

And you know, here is to the pity. The structure of the songs on Circle is often very similar from one to the other. As the name Amorphis suggests, all of this is a bit nebulous and shapeless. No firm and firmed up approach visible. Starting with a – well – beginning of sorts kind of sauntering along. Then towards the middle they invariably inject some sort of a solo, riff or other interlude of sorts.

And this actually successfully increases the quality of the overall delivery. Yet, as with any strategy, if repeated too often, it grows stale – and here it does. I would however not go as far as accusing Amorphis to have laden Circle with fillers as some others have done. To me the issue is strategy – on choice and structure of tracks to be displayed.

But this does not make it a bad record. If anything, the album is very complex to listen to. So in the end it comes down to this: Circle could have been so much better, if only they had increased the crunch and structured their tracks differently.

We are indeed presented with a mixed bag. The album is good – but then it is not as good as it could have been. Very difficult to decide which way to turn.