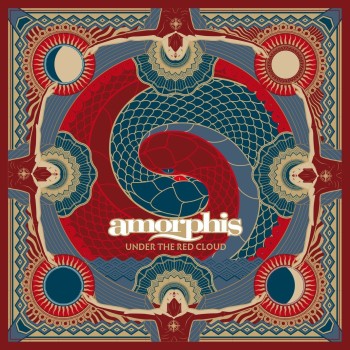 What a refreshing breeze is reaching us from the Northern tundra wastelands! Under The Red Cloud from the Finnish metallers Amorphis clearly is one of most varied albums I have heard so far in 2015. And I have heard a few lately. Yet this one here kicks my writing neurons into motion really quickly.

Very close – for a few of the tracks at least – to the 2014 release of Insomnium, Amorphis have skillfully positioned themselves astride a few metal styles. Under The Red Cloud interchanges clear voice passages with growls, which adds this special and specific flavor to their tune.

And they refuse to be pinned down by one genre or another.

A very good strategy. Under the Red Cloud packs an almost progressive mix of different metal genres. Between Gothic Metal, Melodic Death Metal, Folk Metal and a pinch of Black Metal, you will most likely find something to your taste. This to say that Amorphis have skilfully sewn all this together into a coherent amalgam of things, true to their own sound. Something we already saw in the making in their former records, now being refined in their 12th studio album.

And it is still full steam ahead after all this time. The founding members Esa Holopainen (lead guitar), Tomi Koivusaari (rhythm guitar) and Jan Rechberger (percussion) are still or again with the band and all other members have been with the band for many years as well. Impressive! Not many gigs can show that kind of record.

Okay, there are flaws: Under The Red Cloud sails just a bit too close to the likes of Amaranthe at times. But – hey – very skilfully arranged again. But have a care – too much pop in your metal might ruin the soup. Bad Blood is lurking just out of sight. The song structures themselves are a tad too repetitive. In other words, not enough rough edges, a bit too much trying out well-known concepts all over again. And I do miss some more substantial soloing in this record. I admit, there are some pretty solid solos, but not enough to really please my metal soul. Apart from that, not much to bitch and moan about.

Now, what is meant by Under The Red Cloud being a varied album?

Well, just start at the beginning: Under The Red Cloud (the title song) just leads right off with a stellar keyboard interlude. Starting slowly, building momentum and then taking off like a rocket. And you know what? This is (kind of) funny. You always expect the female front to kick in like a good Gothic Metal gig must, but it is a male outfit. And this first track features one of the rare solos – keyboard and guitar combined. I love it, captures you straight.

Then The Four Wise Ones come along. Finnish Melodeath at its best – in the beginning – but later morphing to Gothic Metal and back again to Death Metal towards the end. Some atmospheric interludes included. And what a contrast to the first track. Absolutely great, I love it.

As hinted above – we have some Bad Blood. ‘Cause if you are overheating the Pop Machine nothing good will happen to your metal. Not bad yet, but this one almost went tits up. This for the same reason that I am not such a big fan of Amaranthe and their Pop Metal style – just missing the crunch in a sea of poppy madness. But then very quickly, Amorphis redeem themselves with The Skull – very good Gothic Metal of the Symphonic kind.

After that Under The Red Cloud starts to get even more interesting: The band around Esa Holopainen and vocalist Tomi Joutsen graces us with wafts of oriental scents moving in, hitting the metal stench with a vengeance in Death of a King. This track features a pretty solid riff, good one. By the way, Esa has no relation to Nightwish’s Tuomas Holopainen.

Enemy At the Gates gets us to rockier shores, again with oriental flavored metal, after some weaker, more mainstream songs just before. But then Amorphis goes Folk Metal on me with Tree of Ages. Holy Cow! A catchy tune, first going instrumental, then underlined with growls, just to switch to clear vocals later. Reminiscent of Eluveitie in a way – really skillfully done and keeping the boredom away. And you will find another pretty cool riff in there, somewhat towards the end.

If you are listening to the extended version, try out Winter’s Sleep in the bonus tracks. Kind of a ballad Amorphis style. I am not sure why this did not make it into main set of songs. What a pity.

You might have guessed it looking at the album art: A loose theme is surrounding Under The Red Cloud. The well executed lyrics are centering around living under a red cloud (well, yeah…) on a variety of subjects. Sometimes mystical and sometimes a bit more cerebral. Actually, they are amazingly well structured and I daresay a lot of thought went into making these poems.

Whilst their 2013 record Circle was generally more straightforward and direct, Under The Red Cloud is much more refined. Amorphis have produced a varied set of metal delights, never forgetting their roots. Added to that are the more folksy elements and tracks that offer a nice contrast to the harder parts in this album, plus good quality lyrics to round things up. This presents you with a juicy set of songs that you will find hard to resist. Sometimes rougher, sometimes more melodious – but always fresh and full of surprises. Go ahead and get a copy!

Editor’s note: If you would like to know how the next album went, here is the link.