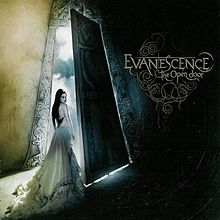 Also, other band members left as well after that. Amy Lee thus became the undisputed leader of this band. And … [...] Click to raid more!

What a total and sad downgrade from the heights of Fallen to this album, kind of unhappily named Evanescence. Only that the evanescence – true to its name – of this gig seems to have finally disappeared completely.

First signs of this to happen already appeared in their former record The Open Door, where one could observe a certain lack of direction and oomph. But still, the latter record contained a lot of good stuff to render it more memorable.

The first studio album Fallen of the US band Evanescence hit the charts like a bomb. It already displayed their unique sound that the band under Ben Moody‘s and Amy Lee‘s leadership created. These were the times, when the relationship still kinda worked between these two.

This combined with the ethereal voice of Amy Lee created the true potential this band possessed back then. And the success speaks by itself. Once the album released in Europe in 2004 (US was 2003), it took off like a rocket, and would not leave the … [...] Click to raid more!