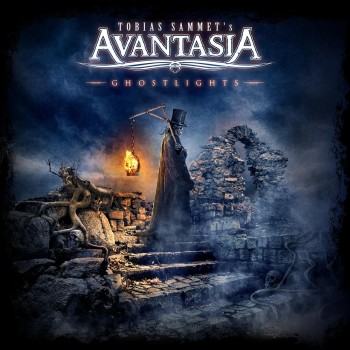 After listening to Ghostlights from Avantasia, we are all going to be encased in a coffin of hard cheddar. Covered with yoghurt and buried in the deep abysses of the Mighty Milky Land, where the cheese was born. Never to come back. And if we do, then as the cheese-ridden undead, madly chanting away choruses from Tobias Sammet‘s latest mighty project.

Because this production will get into your head, replace your windy branches of your brain with Avantasia tracks, and make you repeat them all over again. The never-ending, kind of theatrically laden bombast will help to beat these tracks into you like this mighty sledge-hammer this album wants to become.

The quality and renown of the record speak by themselves: At the time this review is written, Ghostlights already received significant global acclaim, making it on numerous charts and billboards.

Not surprisingly, the album got close to stardom in Germany, but also in the UK and the Czech Republic. Remarkable is rank no 2 on the US Heatseekers and their relatively good standing on a variety of boards across the new continent. And to my unending surprise, Avantasia got themselves a nomination to compete for the Eurovision Song Contest in 2016. For the single Mystery of a Blood Red Rose, no less.  But nothing was to come out of it. Or as Amanda Somerville so aptly put it: “Fuck the Eurovision Song Contest“.

In a way, Ghostlights resembles – in concept (not necessarily in style and delivery) – Arjen Lucassen’s Ayreon. The record displays this same look and feel of a continuous rock opera. Compared to the latter, however, Sammet‘s songwriting is indeed superior. But then, Lucassen errs more on the Progressive circuit.

Whereas this one is more … what? … Fantasy Power Metal of sorts.

Ghostlights is a sort of a sequel to The Wicked Trilogy. Meaning Avantasia‘s last three records – with the latest being The Mystery of Time. The album follows the storyline of their group of mad scientists, trying to improve the world their way. All of the above ends with an open plot for fans to craft their own future.

Of course, this opens the doors to further blurbs of cheese from Avantasia. Interestingly however, this album is much darker and mysterious in concept and delivery, than its meatier and rockier predecessor. A very interesting turn in style.

Now, you’ve just got to look at the red-hot diva list and mighty egos strolling about this album.

This was for sure not easy to manage, even if you can count on a large number of support staff. Old hands like Michael Kiske, Jorn Lande or Bob Catley and Amanda Somerville are known values. It looks like Lande and Kiske both got the most airtime on the album. Whereas Kiske gets the lion share, if you compare with the Deluxe Edition, the one with the many bonus tracks.

Then we have newbies on the Avantasia payroll.

Like Sharon Den Adel (Within Temptation) or Marco Hietala (Nightwish and Tarot). As always, I really like Marco’s unique vocal contribution on Master of the Pendulum. He was always one to lend his voice to a variety of endeavors and by doing this increasing their quality. Just think about Delain and his contribution on Lucidity. Master of the Pendulum could have originated straight from Nightwish’s Holopainen by the way, but it did not.

A tribute to the song writing powers of Tobias Sammet, which already became apparent in the very first song of the album. But more to that later. Sharon Den Adel and her song Isle of Evermore is again tailor-made to her bodice and voice. But – gosh – ’tis not her best contribution in the land of cheese and bombast.

Ghostlights gets going with Meat Loaf.

Yep. I kid you not. This sounds like the ’90 era Michael Lee Aday (or Marvin Lee Aday at your pleasure) in Mystery of a Blood Red Rose. But it is not him, at all. As the lore goes, Meat Loaf was supposed to perform the song, but for some reason management declined doing the deed. Now, the track sounds much more like his mighty meaty self than his own ego would probably permit.

The follow-on epic track Let The Storm Descend Upon You is also the best and most varied of this album. Clocking at a little more than 12 minutes, you need to give it some attention, but it is for sure worth your while.

And this gets me to one of the major positives of this record.

The quality of the song writing is very, very good. Tobias Sammet has this knack and talent to kick well written tracks out into the world. You’ll always find a minus, though. This whole album is somehow cut from the same stone and lacks variation sometimes.

Interestingly, Power Metal records often display this tendency, but not all of them. The latest Gloryhammer album from 2015 – for example – whilst way out there in space and positively covered in fondue, is absolute fun to listen to from beginning to the very end. So is the latest of the Italian Kaledon that just saw the light of day in 2017.

The villain of the piece may indeed be the song structures.

And the rare and somewhat soulless solos and guitar work that pull down the quality of this record. That said, I have observed this already a few times in works with Sascha Paeth‘s involvement. This in no way means that any of these guys are not able to handle their instruments. But in the end it is the ingredients that make the cake. And if the icing is stale, then THIS is what you will remember.

The Haunting leaves me a bit puzzled. And it is not the track itself, which is undoubtedly one of the best on the album. I have heard this chorus (or a very similar one) already many years ago on a German platform. Apart from that the voice of Dee Snider (Twisted Sister, and proud owner of the trademark drag queen outfit) snugly fits the theme of the song. From raspy meanderings to belting out the aforementioned refrain.

The fil rouge clearly outlined by the lantern of the ghostly companion of this album, Ghostlights follows its story along to its very end. High quality song writing, coupled with a large number of truly outstanding artists will make this album worthy of your time.

The theatrical bombast and a somewhat darker and less rocky approach to their tune spice things up some more. As a rock opera goes, it is not bad. However from the standpoint of originality, there is still a lot of room to maneuver. Let’s hope Avantasia will fix that in their next album.