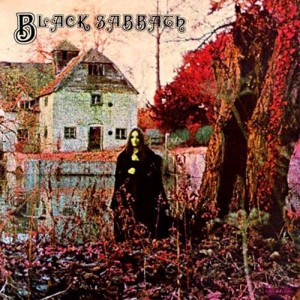 Ah, lauded be thy beginnings, oh black tainted and (kind of wannabe) occult Black Sabbath! I still remember the hazy-daze atmosphere way back in time when we listened to this first Black Sabbath record.

The band recorded the album in a drug induced fog, as the lore goes. Like the whole music industry at that time, it appears to me. And the after-effects can still be seen from within the band today. Black Sabbath actually went to the dark side of the moon, whereas the other potheads rode the wave of peace and love into oblivion. And I love the band for it, because these were dark times in a way.

This was the early beginnings of a great band that – who would have thought – is still going strong in 2015. Later albums have been and still are a living example of a superb music career. Albeit with many line-up changes, re-unions and break-ups, and so on and so forth. But this of course puts spice into this sabbatical soup that makes up the essence of this band.

And the re-united Ozzy Osbourne, Geezer Butler and Tony Iommi are still (or should I say, again?) going strong today like eternal war machines. Just check out their newest 13. And – I daresay – they added much juice and (grouchy) crunch to their music since then, which is downright cool. “What is this thing that stands before me” alright. The proof of the proverbial – and eternal – pudding.

Let’s face it: Black Sabbath kind of laid the groundwork towards Heavy Metal. Or all other kinds of Metal for that matter that we today so ardently enjoy. Yet whilst this record here still firmly tries to base itself in Hard Rock (not really succeeding), later records went all the way to Heavy Metal. And many bands coming after them have got their influences from this band’s style.

The whole production is unfortunately tainted by what they thought back then should be great Hard Rock sound. Okay, perhaps technical constraints imposed their limits of what was feasible at that time, too. As well in terms of production or mixing and mastering.

All of that – most unfortunately – is somewhat influenced by the psychedelic bullshit the ’68 generation flower-power people played back then. But don’t get me wrong, not all was bad during this time period: This was indeed the heyday of bands like Nazareth (Love Hurts – 1975 for example), Thin Lizzy, Scorpions. The beginnings of which were with Michael Schenker who later wandered over to UFO to cause some mischief. To name just a few.

But still, their tune already was stellar in the ’70s. Even if somewhat flat in sound (when others did already much better in that department), however with riffs that in some instances rival what we hear today. But, gosh, if they only would not have had some of these passages in their tracks that seem to come straight from Status Quo on a bad day.

The center-piece of the album is also the very first track called … Black Sabbath. The thing that stands there somewhere, we still do not know where. And now we know where AC/DC got the idea of a bell tolling for Back in Black much later. Well, they will probably deny that one vehemently as well. Make no mistake.

Noteworthy are also The Wizard, Sleeping Village followed by Warning. The other songs in between are typical ’70s style of bluesy Hard Rock, with some Heavy Metal indicators, but not more.

Well, great beginnings and for sure Black Sabbath‘s highway to fame. I still like to listen to their first record from time to time. Whenever I am fed-up with softie stuff or too much metal (whereas there is seldom a thing called ‘too much metal’).

This record also features on the Old’n’Tasty series. Be sure to check it out!

Right on, buddy. But I really like their newest album best.

Yep, it has that crunch in it, which combined with Ozzy’s metallic whine is just irresistible.