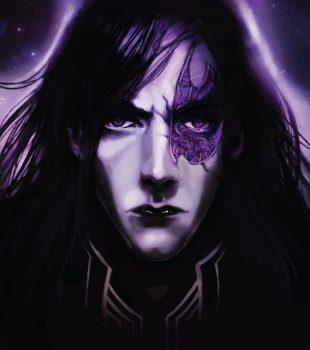 Methinks that 2016 was not exactly a great year for the alternative and progressive scouts out there. You know, the ones holding the torch, while rushing forward into the unknown. And whilst some them are still out there lurking in the RMR review pipeline, a few made it into the blog.

This so happened with The Chronicles of Israfel (correctly spelled, I assure you) and their newest full length A Trillion Lights, Tome II.

The band is actually an (almost solo) project of Dominic ‘Israfel’ Cifarelly (ex Pulse Ultra, Billy Ray Cyrus, Scars on Broadway) with the help of his brother Vincent aka Veloel.

Now, almost a decade ago Israfel and the band issued a first record called Starborn. And already then the project was nowhere near lightning fast with the delivery of material, but took a whopping three years to deliver the first goods. The band itself was born in 2004 and the first record released in 2007 only. This here record is their sophomore effort, the mighty black cliff bands often shipwreck on.

And I am not sure what I expected. Something similar to Steven Wilson‘s 2015 exploit? A remake of the excellent last offering Wilderun was able to provide last year? Or a piece of work matching the excellent (and emotional) story-telling The Reticent was able to produce? Of course, in such a genre, an intended coherence may very quickly descend into incomprehensible mayhem, if no careful structures exist and the question poses itself:

Is this the case with A Trillion Lights, Tome II?

Very often the progressive universe is synonymous with being out there at the edge. They are kind of condemned to live by the Star Trek credo come alive all over again: To boldly go where no man has been before. Digging in holes that others abandoned a long time ago already, not afraid of the monsters you might unearth if you continue. Seeking out pathways that their brothers in crime didn’t dare venture on yet or left in fear.

The outcome is often excellent and – I daresay – as extravagant as metal might ever be. Very far from the fiery pit that some of the more molten brethren somewhat stubbornly dwell in and call it cvlt.

And then you will have those who pack whatever ingredient they can think of into a record. Using the mighty mixing machine with too many tracks to play with, just because they can. And this does usually not necessarily bode well. This overload can work fine, if song structure, mixing and mastering go the stellar route. Less so, if this is not the case.

Now, this here album gets you exactly this overstuffed feeling with too many sharp corners to draw blood from.

In essence, we get served a pretty wild medley of ill-fitting parts, kind of helter-skelter put together. But then again replaced all of a sudden by pockets of cool excellence during the more dreamy parts. A somewhat confused and sprawling scattering of tracks called A Trillion Lights, Tome II.

But let’s have a look at them tracks now, shall we?

From the very first moment onwards the Dream Theater-isms are really striking. That, together with the Devin Townsend-esque presentation of some of the tracks really firmly sets direction for this record.

And frankly, The Chronicles of Israfel really pretty much stick to their guns on that one.

A Trillion Lights gets off kind of funkily with a folksy little tune. Colors Of The Energy Construct sloshes pretty acceptably into track #2 called Goddamned. ´Tis the most metal-laden track on this record apart from the very last one. ‘Cause the third track I Remember gets you a first sample of this disjointed song-writing. And an extremely loud and scratchy mixing and mastering job to boot that continues to plague the rest of the track list.

Now, the whole record is somewhat of an oxymoron. A sprawling complex of elements, where highly technical #metal meets frankly bad mixing and mastering of sometimes almost amateurish proportions. The good co-existing with the bad, ying and yang all over. Then you get the folksy parts like Greet the Sun or Spirit Carousel that really surprise with a few good vibes. And a few good rockier parts too like In Ruins.

But there is a dark side too.

Life I know and the adequately named track Nightmare just want to make me blast Metallica’s Waste My Hate back at them. Them wretched unclean vocals with the uneasy singing job just make my teeth grind to no end. This sounds like a banshee with a throat ache for fuck’s sake.

But then A Trillion Lights, Tome II never ceases to surprise, doesn’t it?

The very last track The Turning of the Heavens gets you this inkling of what could have been. Purely instrumental it projects a laid back metal theme onto the last moments of the record. From relaxed piano sounds to – how to call it – progressive thrashing, all there. And this is what we should have had more of throughout this record.

And did a trillion lights live up to expectations?

Well, you listen to this record at your own risks and peril. And it might very well push you over the edge, either by pure delight or a hate of whatever is there.

The Chronicles of Israfel clearly have some very proficient and talented musicians. And this shows in the high quality of the riffing and soloing going on at every nook and cranny of the record.

On the other hand, the sprawling complex called A Trillion Lights, Tome II contains too many impurities, and a seeming lack of concept that really turns out to be a quality killer of sorts. This is a pity, as all would have been there to compose a great album.

Yet just stringing tracks together that appeared to have grown by osmosis over the years will not enable them to do just that.