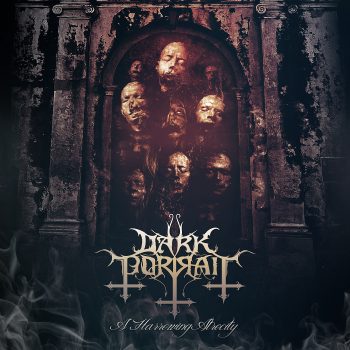 We kind of felt that this may turn out to be the unholy year of Black Metal. And – indeed – it proved black in more ways than one. Like the fucking 50 shades of gray gone very dark and blood-laden all of a sudden.

We enjoyed Ritual Black Metal from the likes of Darkend. Loads of Atmospheric stuff coming our way too, which seems to be the new, sometimes almost sanitized blackened style of the day. Played a lot by dudes without corpse paint.

And now Greek fire starts to get on our mutual radar screen.

And I kid you not: Dark Portrait joining us from Athens serve us with their debut album A Harrowing Atrocity. The band was born to the dark lord towards the end of 2010. After some lineup changes they issued a first EP in 2012 called Fiend Incarnate. The band states a large number of influences, some of them clearly visible. But more to that later.

It’s real Black Metal, make no mistake. And it has actually got ritual tendencies too. However, Dark Portrait managed to marry the lava-hot blackened metal style with some pretty sturdy symphonic elements that would shame many Melodic Death Metal outfits. They do that without getting into an avalanche of cheese neither.

Then Dark Portrait lose themselves into some baroque kind of keyboard flurry, making you want to scrape of the corpse paint and use a Venetian mask instead. And this potpourri of elements is their main strength that will always return throughout the album.

A Harrowing Atrocity lands us where exactly?

The metal sounds reaching us from the troubled shores of Greece and this corner of the Med in general are a pretty substantial part of this genre’s sound supply. Ranging from Symphonic over Thrash to interesting shades of Black Metal. Some of them bands sprinkled on the islands, and others on terra firma.

One would think that the gentle climate down there will not be conducive to harsh sounds. We all still have that impression of Retsina infused bouzouki melodies, and drinks by the beach. But hey, sometimes this music stops and a chair is missing. Then the trapdoor slips open and down you go along this slippery slope. Into the abyss, where Dark Portrait and their ilk dwell.

Then they open up with an intro. Dammit!

And it sounds like fucking Epica’s The Phantom Agony. But once you get lulled in that feeling that you got Epica working on you, a wave of nauseous black metal hits you like a ton of bricks. Called The Incantation for Lamia, no less. Lovely, a peppered load of Full Black Metal Jacket, just for you.

A daemonic ritual right at the beginning of A Harrowing Atrocity is just the level of juice this metalhead needed to start writing. And it comes with a flavor of Cradle of Filth as in Nymphetamine, screams and all. This combined with the aforementioned Epica-esque symphonic tendencies renders this track just irresistible.

Of course, having such a stellar blood-dripping offering at the beginning of an album raises a lot of expectations.

So, does A Harrowing Atrocity meet these expectations?

The Rise of the Anti-Christ mixes operatic vocals into this metal brawl of sorts. But it is not Tarja Turunen as a first impression would suggest – Loki be praised. The culprit is Iliana Tsakiraki (Enemy of Reality), who already contributed to Septicflesh and their 2010 album The Great Mass.

Not surprisingly, the latter are Greek too, so this fits. And the operatic flows well together with the black universe of the Dark Lord as presented by Dark Portrait. Again a track thoughtfully executed with a lot of gusto, and quite unexpected. This time with a hint of Arch Enemy towards the end.

When listening to the album I kinda feel like Lestat the Vampire on the prowl. Specifically in the baroque Cassandra’s Tragedy. Again, the flavor changes in this track to something lighter, but not less threatening. Just avoid the moon and don’t go out at night when listening to this track.

Many Black Metal outfits can only do this one style. And they repeat it ad nauseam over and over again. Then expect us reviewers to beat some sense into the shit they are producing.

Not with this band.

The album provides this easy variety that I have seldom heard done in the genre. As an example, take Beauty is Frail. This comes at a point where many other albums fail. Not this one. It just gets you with another idea of variation. Great stuff.

A Harrowing Atrocity – the title track – displays this slightly cheeky flavor. And at the same time the band pulls out all the stops. Whilst you need some time to get to the good stuff on this track, it is worth a listen. They packed this with a shitload of elements that become clear only very late into the song. So, good one. The album itself really does not run out of steam until the bitter end. Only that a whiff of madness kicks in late in the record, not quite surprisingly I might add. Just check out Ocean of Pain– the second before last.

A Harrowing Atrocity puts a smile on my face!

Dark Portrait created a very dark, ritualistic, but still varied piece of Symphonic Black Metal. It is one of these records that capture your attention and won’t let loose easily anymore.

Their pointed melodic style may not be every Black Metal fan’s cup of baroque-tainted ritual blood. And purist Black Metal geeks will loudly claim that this is not, and cannot be it. Same as some of them continually try to do with Cradle of Filth or Carrach Angren.

But – if you got the stomach for it – this is great Black Metal. Well done, Dark Portrait – good stuff.

The record also features on the 2016 Top Ten Records of RMR. Congratulations.