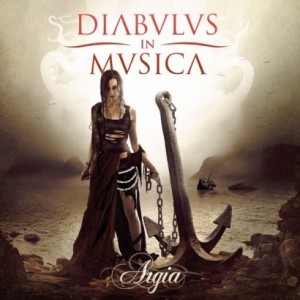 Whoa! Now some of the fans are going to be pissed off. So many very good reviews heaping praise on this record. And I just cannot get too warm with it.

We talk about Argia, the 3rd full-length album of Diabulus in Musica. Oh yeah, ’tis the one – the much awaited and hyped about. Once again, Argia is very complex fare, like their last one The Wanderer. And beautifully interpreted by Zuberoa Aznàrez, the delighting female front of this very talented band in tandem with Gorka Elso and the rest of the band.

Both founded the band way back in 2006. It took them a while to move to the front of the genre. But once they started, it was lightning fast. Diabulus in Musica is now a name to be reckoned with in the Symphonic Metal and Gothic Metal arena. This is a testament to the quality they deliver. And they usually rock!

Because – and considering all the effort involved – some of that production does sound relatively flat at times. In addition, the brick walls loom very high on Argia. The lyrics thus somehow indifferently swim in a sea of instruments. And don’t really shine in any way. And some of the guitar work seems more on the boring side. Albeit, sometimes you can find a friggin’ solo that gets you interested.

Now, having said all that, the first half (or first three quarters) of Argia is very rocking good. Exactly what you would expect from a Symphonic Metal band with some oomph. Specifically noteworthy are the thrash-laden From the Embers, Furia de Libertad and the astonishing Maitagarri. This followed by the soft ballad Eternal Breeze.

The band almost overdid it with their synthesizer-infused track Inner Force. This one teeters on the edge real bad for fear to fall into the abyss. Where the devils of electro-pop worship Amaranthe and their ilk.

But – hell’s bells – it is the other part that starts to be too operatic/orgasmic at times.

And this is not something you want to hear, if you like some real crunchy metal in your cereal mix. Again, the record wants to be some sort of an opera without being one, like I lamented on the last record. And this is the annoying part of Diabulus in Musica. If only they were a bit less lavish in dispensing operatic bombast, and a bit lighter in tune. This would go a long way towards much better quality.

Now, do not get me wrong. The rest of Argia is not bad either. There is some rock-hard chugging present big time as well. But, put too much of opera in a record, and this will impact its rating big time.

And sometimes you feel stuck in a bad copy of Highlander, clashing swords with some monsters of the weird. Until the lightning strikes and the tower collapses.

Sorry guys, you could be Xandria times two, and fucking rock. You’d even get these old bones and their sorry ass off their chair. To positively rock around the room some.

But too much operatic bombast killed the messenger. Damn.