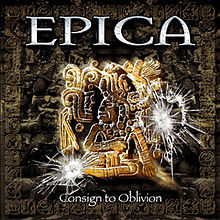 But, where is the metal? This is the question I asked myself since starting with this record. It kind of gets off the ground with some theme seemingly from the Pirates of the Caribbean or something. And then – more symphonic orgasms by the dozen. But the metal? The METAL? It somehow lost itself along the way, methinks.

‘Tis a most strange production! Or is the 2nd studio album Consign to Oblivion of the Dutch Symphonic Metal band Epica just an example of playing it safe? But as they like to call their style Gothic Metal – well, this is kind of an important question.

The theme is – of course – again of the sophisticated kind. To take the Mayan culture as a platform IS courageous. The lyrics are thoughtful. As usual I would like to say, knowing now what came next of course. The review is written in 2015. Epica are renowned for their – well – almost academic choices of themes and their texts, which usually beautifully make sense.

The rest of the performance does however not bode too well: The guitar work is somewhat boring on Consign to Oblivion. Repetitive, no real solos to speak of. The ubiquitous drums, complete with drum blasts and stuff always lurking in the background. Yet, nothing too cool to juice you up. Keyboards without spice, kind of listless. The more renaissance colored parts that should have sounded like Lestat the Vampire on the prowl are just flat. The notes are there alright, but nothing much else. It really looks like Epica somewhat lost their compass leading nowhere. On this record at least.

And if Epica would realize that this is not a competition of disembodied chanting, but some Gothic and Symphonic Metal, things would look more lively. And for sure more meaty. Meaning: We have a tad too much choir in this choir laden record. Again with returning contributors. Amanda Somerville being one of them.

Aye. There is a lot of grunting, huffing and puffing going on. Even if the mathematicians in the reviewer’s world tell me that there is growling present only in 3-5 tracks, depending on the version of the album. Well, hells bells!

It is not the number of tracks, but the felt eternity these grunts are going on. And this renders the croaking about the soundscape a little tedious.

And what does it make even more tedious to listen to some of these tracks?

It is that Epica forgot about the Beauty and the Beast concept. In fact, they gave the growler – Mark Jansen – an equal role to the Beauty, the cute and very talented Simone Simons. A good example is Consign to Oblivion (the title song). So, instead of spicing it up with more Simone, it became heavier to digest with a load of Mark.

There are funky highlights however – again of the renaissance kind – Quietus being one of them. That is the kind of spirit we would have liked! A little more oomph, some spice, less choir overload.

The other one of this kind is Trois Vierges (three virgins in French). But – gosh – this is a discourse between the orchestra and Simone – no metal whatsoever. The duet is not bad – this time done with Roy Khan once upon a time from Kamelot (not surprisingly – they were touring with them at that time). But why on earth they chose a guest singer is a mystery to me. The song itself is actually pretty good, yet kinda gloomy. The Gothic or renaissance influence is quite apparent, but again very centered on the orchestra. Less so (or not at all) on the band, which must have been bored to death recording this.

To Metal or not To Metal, that is really the question in this album. Interestingly, in the concert version of different songs the band corrected the overdrawn bombast that is prevalent in the recorded album and replaced it with – metal. I’ll be damned! But unfortunately I am reviewing the album, not the concert performance. It shows ye however what could have been done to get this one way more juice, but for some reason they didn’t do it.

In short, an overall impression of mushiness permeates this record. Compare it to the former production The Phantom Agony and you will find the oomph wanting in many places. As an example, in the 1st album, the intro kind of whetted the appetite, which was then followed by Sensorium. Pretty cool, that one – stepping up to the plate, spicing it up. However in this 2nd edition, nice try to the same with Dance of Fate after a very weak start, but nowhere near to what we saw before.

Missing power and drive, plus losing themselves in endless operatic innuendo has for sure not helped Consign To Oblivion. Even if the lyrics and theme chosen are very good. On the positive side, this is a very complex concoction, well executed and produced. But the outcome .. hmm .. you be the judge.