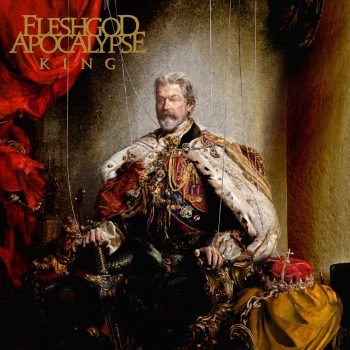 Fleshgod Apocalypse is a relatively young band. They formed in 2007 in Perugia/Italy. You know, the medieval city with the escalators that move you from the catacombs to the light. A place of epic murder trials, loads of chocolate and pasta.

How very fitting a background for the Machiavellian theme employed in this album. And not yet quite 10 years into the game, they came a hell of a long way in a very short time. And I am saying this now, because their style is really difficult to match in terms of complexity. Many a band certainly got some inspiration off their unique style, like Kaledon, Parodos or Lör.

King culminates their past offerings. Or does it?

Fleshgod Apocalypse‘s latest is indeed proof of the proverbial pudding. The album follows a pretty serious theme around kings, subjects, power, the issues and influences.

It will behoove you to check out the lyrics, too. Carefully cast and thoughtfully executed, they are really noteworthy and provide a good understanding of the album. With the exception of Paramour, which is simply plagiarism in a metal album, but more to that later. But then again the plagiarized victim has been dead for a while and does not care, the writings having passed into the public domain.

Yet this record has this tendency to go the route the 2014 Epica record. The latter stuffed way too many elements into a single record – just because they can. And this did not end well for them.

So, how did King fare on that?

Fleshgod Apocalypse just barely dwell on the good side of this thin red line. What renders the record interesting is the inclusion of Venetian-infused neo-classical elements. Then suddenly the switch to Melodic and Symphonic Death Metal comes unseen and startles the unsuspecting listener. All of that with a lot of orchestral spice that suddenly pops up from unsuspecting corners.

Now hold on to your seat: Sprinkled into the overall delivery you all of a sudden get djents creeping up on you. This adds some neat flavor for the Progressive Metal camp, even if some decried this as cheap politics. Not to forget the solos that come up in many of the tracks, kind of out of nowhere.

Needless to say that this record is nothing for the casual listener, given the friggin’ complexity of King. Whenever I listen to this album, the saying ‘Too Many Cooks Spoil The Soup’ comes to mind. There’s just too many contradicting elements in this mighty cauldron of theirs, threatening to turn this merry soup kitchen into Guy Fawkes night real quick.

Now, it is indeed a good sign that Fleshgod Apocalypse saw the light and employed the services of Fascination Street Studios in Sweden, led by Jens Bogren, for mixing and mastering. Bogren is known for successfully taking on complex jobs and – by Loki – this is one of them.

The compression is still heavy and some elements are (almost) lost at times. But given this whole, weird mixture of tunes, instruments and directions, the job is pretty well executed. Which again saves King from being thrown to the wolves. Big time!

With all this negativity out of the way…

King churns out a fascinating tune. It is like Diabulus in Musica on fucking steroids with a Death Metal twist. And with the female front sent to cover the role of Lucrezia (sorry, Zuberoa…). Symphonic Death Metal would describe it best, ranging from orchestrated bombast to classical soprano. And all that displays this tendency to change in the blink of an eye.

The way they pack classical and Venetian elements into this metal risotto of theirs and mix them with Death Metal is quite compelling. And sometimes you have no idea where all this is headed. Only to be reminded by the ‘fil rouge’ that is sometimes popping up out of nowhere. So, you will think there is some meaning to chaotic song structures and confusing turns that will just make your mind shut down if you don’t pay attention.

You will get a first taste of chaos in In Aeternum – a thrashy Death Metal piece, all of a sudden going clear voice on you with the chorus line. Then you ask yourself where the fuck the guitars are. And indeed, they are indiscernible until the friggin’ solo kicks off, followed by some string passage in clear voice. ‘Tis tough fare! Non metal fans abstain.

The Fool, starting with a full harpsichord attack – Venetian style – piqued my interest next. Only to deepen it with orchestra supported Death Metal with a pretty stiff guitar solo later on.

It fascinates me, how Fleshgod Apocalypse were able to project a cheeky look and feel into this track (it is the fool after all…). Regardless of the fact that they mix classical with Death Metal and back. Cold As Perfection will indeed leave you cold until the monologue kicks in followed by the solo and backed up by classical vocals. This saves the beacon of this track for sure.

Then Paramour (Die Leidenschaft Bringt Leiden) hits the track list. Woe, by Thor! Should I love it or just cry? Carefully massacred, straight from Goethe – cut and paste.

Delivered in some questionable German with a terrible Italian accent by the soprano Veronica Bordacchini, and purely classical.

I know it fits the theme, but this is just terrible. But then again it goes well the overall concept, which switches between terror and good stuff so many times it becomes difficult to judge.

Last, but not least…

The remaining tracks And The Vulture Beholds (containing a superb tremolo part, kind of in the midst of a couple of solos), Gravity and A Million Deaths are of the same vein than the preceding tracks. All good, but not outstanding in this sense.

But then it comes: The low tempo, almost ballad-like Syphilis earned some serious brownie points for the drama and the disturbing mood and atmosphere to it. The beauty and the beast impersonation – together with the orchestral integration – on this track is priceless, with a dialogue with the king to boot. And this time, the soprano is getting its full share and IS aligned to the songs overall structure and direction. So, this last one before the outro is actually one of the best tracks King produced so far.

And where does that land us?

I applaud the ideation, song writing skills and the courageous application of all elements present. All of that translates into one big, huge and somewhat messy baroque battle of the bulge they are fighting throughout the record.

However, Fleshgod Apocalypse are really walking the plank.

Out over the void that dwells on the other side of the edge of this abyss. That they did not fall to their destruction is to a big extent the result of the mixing and mastering effort. And secondly, the application of a serious theme and this knack to link classical instruments together with modern Death Metal beats. Lastly, they did not lose themselves in a mess of their own making neither.

Does this make King into a good album?

It indeed does, but the album is for sure not for those looking for the low carb diet drink. This is a really heavy Italian Cuisine Borgia style; red meat with heavy sauce and dark, very, VERY red wine. Consumed behind a Venetian mask. And you never know what lurks underneath it.

And congratulations, this record made it onto the 2016 Top 10 Records and the Intermittent Digest IV. Well done.