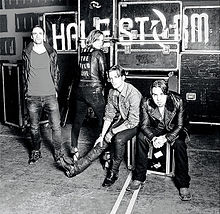 This one took me some time to digest, I admit. Sniveling rage gone and replaced by what? Lzzy Hale growing old, going pop and full blues rock on me? For sure this isn’t what we expected from Halestorm for their newest, lengthily announced 2015 magic potion Into the Wild Life.

Methinks Halestorm tries to jump on to the mainstream train this time. Which would of course be much more alluring money-wise than anything else that the band could generate screaming about outside, off the beaten track. But then, they do this mainstream thing Halestorm style, which is kind of reassuring. Meaning with a lot of energy and thumping about – their pop-infested, new soundscape.

The change in style to the last album The Strange Case of… from their 2009 self-named record Halestorm was something I still could fathom easily. A softer side from Lzzy together with her usual rage. Cool, accepted.

But on Into The Wild Life it kind of goes full-blown bluesy R’n’B, Heavy Rock style on you. Warping all this into a more Blues Rock ’70s style of tune. Much less into-your-face than their previous offerings would suggest. All this kind of reminds me of the chutzpah from bands that were dominating the Hard Rock and Heavy Metal stages way back in time. Yet again, Halestorm – true to their style -come across as much more aggressive than what these old geezers would ever be able to muster. And what calmed me down was the parental advisory on the album cover. Not all lost, I thought – big laughter.

And then talking about the ’70s: What the hell are these godawful keyboard interludes doing in some of these tracks? Good grief! The one in What Sober Couldn’t Say just makes me grind my teeth. Some of that new style stuff has gone totally haywire and I don’t get it.

You have to wait a very long time to see some real old Lzzy Hale appearing again. Until Mayhem – right at midpoint – to be precise, with a friggin’ solo to top it. Okay, Amen may qualify as well – up to a point. This one is a pretty comforting island in this endless sea of rosy nothingness of the first half of the record.

The next one in this department is Apocalyptic with a short, but – again – a pretty cool solo in it. But the excellent screamer I like it Heavy – the last track for sure stands out like a welcome sore thumb. If that can exist at all. This one put a real smile on my face, when not much did on this record. Rough lyrics, rowdy rock and all – just tasty. Even the (somewhat debatable) gospel style end piece is well executed. Good one!

But the beginning is totally new in terms of trademark style! Mixing pseudo-hard rock with more poppy, bluesy stuff. Again with the evil ’70s keyboard grinding away in the background. Scream has good rhythm in there and is rocky to the point of getting interesting. I am the Fire is of the same vein and we do see some of the old Lzzy peeking quickly around the corner. The song taking on steam towards the end, big time.

Dear Daughter sounds like the soft-assed bullshit the latest of Train depicts so well. So forgive me for dissing this one quickly and move on. And yes, I know that the latter released much later, but the similarity is just too juicy to not mention it.

Well, Into the Wild Life is still Halestorm, not an iota of doubt about it. But a much more mainstream-oriented brand – by design. Riff heavy, but very pop and blues rock of the R’n’B pork rib kind at times. So, not really everybody’s cup of tea. And this will for sure draw loads of flak from the old fan base.

Into The Wild Life is definitely the most interesting one in terms of newish flavors and tastes of different kinds. Friends of the old style will hate this one with a capital H. The disc is reasonably scratchy and noisy for newcomers, true. But for old hands in the Halestorm multiverse, this in a way only barely scratches the surface of the essence their other albums thrived on so well.

One of the main setbacks of Into the Wild Life is indeed that it is banking on old, very old values. And mixing bad with worse in a sense. We all kind of heard those variations before, whilst the band tried to give their tune the sound and feel of something typical Halestorm.

Admittedly, other bands do this too, but they steal better and adapt it to their styles more convincingly. It is thus remarkable that – with lessons learned – exactly this weak point turned into something quite strong on Vicious, their newest of 2018!

So, is this whole album a sad dud after all? Not quite, but there’s just too much half-baked stuff in there to really get warm with Into the Wild Life. And that is a sad state of affairs.