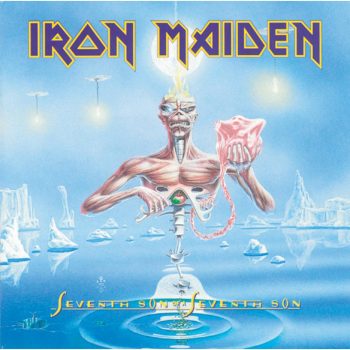 Did you know that music CDs finally outsold vinyl in 1988? The CD hype was a big revolution back then. That was also the year with Ronald Reagan (the actor) in power in the US. Terrorists blowing up jumbo-jets over Scotland and American missiles bringing down a passenger plane.

1988 also was the year of Iron Maiden‘s seventh (!) full length studio album Seventh Son of a Seventh Son. The album marked the 5th record with Bruce Dickinson at the helm for vocals since The Number of the Beast. He jumped ship later in 1993, which made the band lose a lot of popularity first, and quality later. For instance, X-Factor featuring Blaze Bayley on vocals got Eddie’s flagship already quite firmly stuck on a number of cliffs. And the band had trouble to free this sorry boat from these rocks, until the return of the prodigal son towards the end of the century.

Seventh Son of a Seventh Son starts off with this stellar opening on Moonchild: “Seven deadly sins, Seven ways to win, Seven holy paths to hell, And your trip begins”.

Whoa, you think, and wait for the juice to heat up.

But in vain. The somewhat explosive, screaming takeoff found on The Number of the Beast or Powerslave just ain’t coming. Instead, they serve you with a somewhat watery metal concoction that seems bloodless at first.

The changeover to a more progressive and – I daresay – more technically advanced style was probably most shocking to most fans. And to this day, many a fan cannot forgive Iron Maiden for this. The change is indeed remarkable: Out the door is the aforementioned almost insane power that used to stampede over you in earlier records. And in comes a much more refined tune. Of course, it is still Iron Maiden, no doubt about it. And this gets you thinking: Whilst change is good, too much change means chaos.

This bears the question, if this was really so.

Well, many of these new style elements introduced on Seventh Son were re-used in later albums. And some of that got transformed into Iron Maiden DNA that remains visible in today’s offerings. So, if nothing else, this album was a cross-roads to bigger and better things to come.

I was always fascinated by the album art.

Iron Maiden style gruesome, without being gory. And still mystifying enough to be captivating. Compared to the previous covers, this one is almost nihilistic. An indicator of the change inside of the band, perhaps?

Iron Maiden increased the use of real keyboards for the first time on Seventh Son and it shows again in the opening song. The poppy start to this album is probably not everyone’s cup of tea. But it is quickly replaced by the trademark galloping sound going at some reasonable speed shortly thereafter. And the use of the keyboard turns out much more skillful as the shocking first moments might suggest. Steve Harris‘ bass charging forward like Road Runner escaping Wile E. Coyote never ceased to astonish me. THIS is how bass should be played.

The holy shit moment will arrive once you get to the first solos.

Dave Murray really pulls out all the stops and delivers some solos going up and down the fretboard that just made me join the fanboy crowd in a hurry. And he propped this progressive sound onto a decidedly ’80s sound, which is astonishing in itself.

On top of the stellar technical prowess delivered by the band on this disc, the mixing and mastering job really takes the cake. Soaring vocals (of course with Bruce), guitars crystal clear, drums crisply delivered. I could just go on. This alone will win them loads of brownie points back that they might have lost with the apparent power failure.

For those swearing that there are absolutely no fillers, slow down. Nomen est Omen: Not sure what mad streak rode them to serve us with Can I Play with Madness. It is amazing: First they heat everything up nicely with the first two tracks. And then – wham – the third offering gets us this … thing. A radio-ready, totally cheesy track, only slipped in to get more oomph with the soft-metal wannabe fans. So, lo and behold, the track got released as a single to the mean masses. To its defense, the song did pretty well across the charts. Iron Maiden definitely hit a nerve with wider public.

Seventh Son of a Seventh Son is one of these albums that actually gain steam towards the end. Starting with the title track at mid-point, it charges forward until the end with high quality material one after the other. I do specifically like the final track of the album Only The Good Die Young, where a link is made with the opening. Meaning, we got ourselves a theme album of sorts as well.

The sheer, raw power and aggressive style on Powerslave and The Number of the Beast still and always take the cake over this album. But: Seventh Son is definitely one of the most refined albums Iron Maiden ever produced, and matched never since.

Technically outstanding, introducing Progressive and synthesizer-driven elements, the disc is definitely a turning point of the bands path of the future. And it shows today: Iron Maiden is still amongst us in the Year of the Lord 2016. Stronger as ever.

Editor’s note: The record successfully made it on the second installment of the Old’n’Tasty series. Congrats!