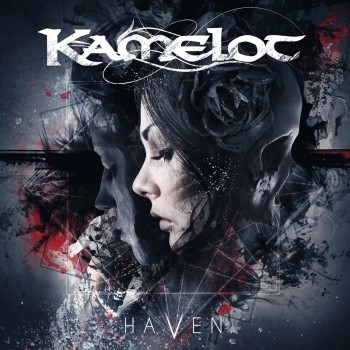 The name sends you echoes of mystical events way back in time. To King Arthus’ court of the round table of valiant knights. An epic era much shrouded in fabulously famous legends of all kinds. And here we are expecting something stellar around these lines. Metal at its best.

And I am getting something that somehow sounds like it, but it just does not quite feel right. Epica made the same mistake lately with their 2014 disc The Quantum Enigma– the overdone turkey one, with too much gravy. Too much over-compressed bombast, too many instruments to play with. Overproduced to hell – you name it. Something similar happened here with the American band Kamelot‘s newest creation Haven.

And I have really been looking for it. Ah, where is it? I am missing it. WHAT? The Crunch! The excitement of listening to a rusty metal record and the fucking adrenaline that goes with it. The scratchy surface that renders a metal record a good record. Pumping up the blood pressure. THIS is what we metalheads crave like a vampire does blood.

The album cover says indeed it is Kamelot‘s 11th album Haven, released earlier in 2015. And the line-up – apart from the band – is pretty good too. An eclectic list of guest performers consisting of Charlotte Wessels (Delain) and Alissa-White Gluz (Arch Enemy) actually appearing in two of the tracks. We are not just getting to hear her usual growls, but also her really good clear voice. Plus Troy Donockley (Nightwish) letting his uilleann pipes rip on this album.

Polished comes to mind when trying to describe the sound displayed in Haven. But NOT metal, like in rough and dirty. Whitewashed, clean, not much in terms of hard corners and edges in this record. Comparing this to some real metal – like the latest Blynd record I just did a review for – this sounds like bland soup given to feverish patients trying to shake their decease.

But understand: All the ingredients for a good metal curry are there. There is NOTHING wrong with it. But Haven is losing itself in a goddam’ gazillion of over-synthesized elements that just dilute their fucking tune. Even the masters of the poppy seed – Amaranthe – would have trouble doing a better job.

This is how bad this irks me, guys. Now I start to sound like some of my co-reviewers on a bad day. Only they managed to sound much more refined these few months past. Well, lets calm down some. What drives me nuts is the fact that I can see the elements of something extraordinary in Kamelot‘s tune, talent and all. Only they did not choose to get there with Haven.

You know, the voice of Tommy Karevik (Ayreon) who joined the band in 2012 on time for their last album Silverthorn is just perfect. A lot of people opine that he sounds like Roy Khan. Not so in my book, even if he tries hard at times. Beautiful and amazing reach of voice, perfectly tuned, not a note out of place.

Thomas Youngblood‘s stellar guitar contributions really make the record. I love the riffs – just check out Insomnia. Double drum blasts perfectly orchestrated by Casey Grillo. Perhaps there is slightly too much hammering going on at times, rendering the drums somewhat overwhelming. All of this is perfectly structured, timed and produced. Sometimes the record sounds like something Nightwish might have produced, but not quite within their reach.

I struggled with the lyrics, some of them going overboard with the cheese, others again being very good. A mixed bag. The cover art is pretty well done by Stefan Heilemann, whereas some of the merch work was created by Gustavo Sazes. Stefan also provided the album cover for Silverthorn by the way.

Haven starts to get really interesting with Citizen Zero managing to inject some serious oomph into the overall fabric that is being woven into this record. This track is probably one of the best on this album. Then the record will take on some power and speed with Veil of Elysium. This one risks to stick with you for a while – pretty addictive. By the way, the acoustic version of the track on the extended edition of Haven pretty much beats the official track, displaying a more authentic look and feel.

The ballad Under Grey Skies featuring Charlotte Wessels will be worth your listen too. But have a care – this is going way beyond anything we should have to endure with a metal outfit. No doubt: Professionally done, all spiffed up, very … polished and really well executed – choir and all. But it feels like something the pop queens of yonder atrocious music television shows would have produced, glittering lights and all.

What came as somewhat of a disappointment is Liar, Liar – the track featuring Alissa White-Gluz. Now, not all is lost: The quality of the solo featured in there is actually astonishingly good. The track itself delivers a relatively good crunch. But then they lose themselves in a ton of different elements, cheesy lyrics and all. The overdone turkey all over again. And this is where Alissa sings clear voice in parts – a real delight. The video of this very same song – however – is amazingly good stuff.

Here’s to the Fall – the second ballad in Haven could have jumped straight out of some sort of a musical. Get my drift? Kamelot are going progressive on us in a sense. But then comes Revolution featuring Alissa as well. And I thought this one will get us to more crunch, but it only delivers just enough to be credible. It has – for sure – got more juice than the other tracks. As to the last and title track Haven, I am not sure why this is there. An instrumental outro that just takes up disc space.

Let’s face it: The record is not bad and even very good in some places. A spotty delivery of sun and shadow. Haven will for sure not reach the exalted realms of their former work, such as the very good Power Metal record Epica (not the band, the Kamelot album) that came out in 2003.

And I got two hearts beating in my chest: On one hand the bombast and cheese are just a fleck too much. But on the other side there is for sure good quality music in this record, good talent and a thoughtful production. As said above, however, this is all so polished, you almost forget that this is supposed to be metal. And THAT is a pity.