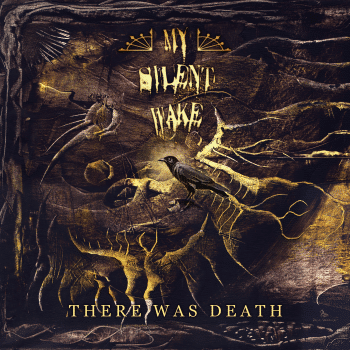 Once desolation and doom in metal takes your fancy, you probably need to look no further than My Silent Wake. Former works like Damnatio Memoriae were already right up there with the likes of My Dying Bride and Paradise Lost. Or with a dramatically less meaty version of outfits like Loathfinder.

Yet, the band’s gothically tainted, painfully bleak and bare bone approach to Doom Death Metal always allowed them to carve out their own niche in this genre.

Then again – never shy of experiments – Ian Arkley launched himself into Invitiation to Imperfection in 2017. A somewhat pigheaded unplugged piece that the jury is still out for. Not unexpectedly, some off-flavors of the latter spilled into There Was Death. And this morphs this newest record into something much more controversial than other Doom Death Metal pieces currently on offer.

Now, if this is good or bad will be in the eyes of the beholder. But it for sure risks to be a source of pain and suffering to the casual purist out there.

There Was Death is My Silent Wake‘s 10th attempt to conquer the doom-ish and dreary in metal.

Very often bands wear themselves out by revisiting the same soundscapes all over again. And who can blame them? Your passion might be this very specific genre of yours. But to inject new stuff – whilst still honoring the old ways – becomes difficult over time. You might find yourself suddenly on endless loops already visited before. And the question poses itself: Does this happen with this newest edition of MSW’s brand of doom?

At first, My Silent Wake dispenses nothing new under this watery sun of theirs.

Or so it seems at least. Dying Man’s Wish starts as expected, in the wake of former records and firmly on course. But then this hint of dissonance creeps in, this whiff of Extreme Metal that installs itself all of a sudden. By mid-point, the song sets the tone of what is to come for the next few tracks. And finally veers off course, the compass to nowhere firmly in place and treads down these dangerous paths other Extreme Metal outfits took.

Admitted: There Was Death does by far not reach down to the razor-strewn, howling plains most of them dwell in. But My Silent Wake offered themselves a refreshing change from the frugal, bare-bone style of old.

Yet, they still do stick to their guns and not all is new and shiny.

My Silent Wake will not let you forget former glories. Their style still firmly embraces those metal roots of theirs, even if we get the aforementioned acoustic injection here and there. Jewels like Ghosts of Parlous Lives will surely attest to that with its clear voice choir and its Insomnium-esque airs.

‘Tis one of the best, reflective tracks on There Was Death by the way. Or Damnatio Memoriae – the second track with its tasty, little solo for sure visits these well-known hunting grounds.

Death Doom Metal with a Gothic tint and served on a bed of newly found Extreme Metal really only reaches as far as the first half of There Was Death. Because by the second serving of the record them dreaded acoustics, clear voice interludes and melodics really take over.

And this refreshingly progressive spill might not sit too well with the traditionalists in metal, I am afraid. You know, these guys addicted to doctrines. Those who like boxes into which everything must go. For whom free thinking is a horror that must be extinguished with rulez.

Yet, as variation goes, this new style might just be what the doctor ordered to take There Was Death beyond Repetition Creek into the disconsolate yonder where grey mists dwell.

This new flavoring starts with Mourning the Loss of the Living, the questionable interlude. This is where progressive undercurrents get to more prominence. In a move that others called a lack of direction. And some detected a loss of speed and determination.

The journey out of the bleak, howling deserts to more progressive plains of doom indeed needs some getting used to, especially with two of them tracks kind of going nowhere. But then come No End to Sorrow and the epic An End to Suffering that kick the record up a notch again. This mix between ambient acoustics, atmospherics and doom will surely get some noses out of joint. But the somewhat reflective airs of the last 15 minutes or so of the record really got on my good side.

In the end, I am relieved. My Silent Wake managed to breathe new life into their brand of Doom Death Metal of the Gothic kind. And by doing so wedged enough new material into this record to keep this metalhead’s earphones on.

However, There Was Death may not please the ears of every Doom Death Metal adept. Nor is it designed to do just that. So, if you look for fifty shades of metal crunch, then this might not be your record. If – however – you fancy variation and the unexpected, then stay and give it a listen.

This is a good record, unorthodox, somewhat stubborn and downright tasty. Something outside of the vile mainstream, but still savvy enough to pique the interest of many. Exactly what the RMR deck crew doctor ordered.

Ed’s note: Did you know that this band also does unplugged records? Interested? If so, hit this link to Damnum Per Saeculorum.