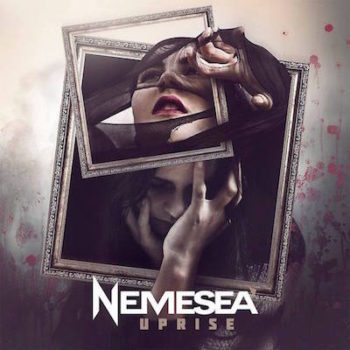 I did not quite know what to expect. Nemesea‘s last production The Quiet Resistance did – well – not exactly exert the metal-infused pull one would have expected. At least not on all fronts – some tracks were right there, some sort of very dark Pop Metal infected with Gothic elements.

Then judging by their about-face they made with In Control away from their Gothic Metal laden style displayed in Mana, it does not bode well for future records (and boy did I love Mana…). Now The Quiet Resistance held loads of dark promise. But what about their newest and 4th full length album Uprise? And after some long five years of wait to boot. Did it go off the deep end or soar into the sky?

First, a word to what Uprise is not!

For those looking for metal, as in symphonically molten or even harder, sorry to disappoint. This is not it anymore – at all. They again did it! This album again veers away from their Amaranthe influenced stream displayed in their last record. And it shows Nemesea still likes to experiment and not stand still. Or is it that they still look for a style that will fit?

Clearly the change is not as shockingly brutal as it was with Mana and In Control, but gone is the almost over-synthesized, albeit very dark and kind of screechy Pop Metal that was very prevalent in The Quiet Resistance. If anything, the style is much more mature now, showing up in Manda Ophuis‘ style of delivery and the overall song structure. It is also a much more pensive way of presenting their very own brand of rock. The dark shadows haunting their previous records are gone, now replaced with – how to call it – some sort of sad unease?

On the other hand the tracks are sanitized down to some 3+ minutes in most cases for a very short 10 tracks of new material. Throw in a few oldies-but-goodies and you have a 14 piece set of rock sushi served on a plate. In other words, risk going out the door, in come somewhat catchy tunes that tend to come across as monotonous after a while.

This tendency to avoid the plank over the abyss and keep things club-ready and on an even keel is quite disturbing. On top, this continual up-and-down, ying-yanging around the landscape is too much of a mixed bag sometimes. I am missing the kind of hidden power, this drop kick that former productions slammed down on you. In short, I am missing the passion of the past.

And it is good that they have a flexible fan base!

With all that gallivanting across styles, like in one screaming change to another flavor for every album, Nemesea is really nothing for your die-hard fan of one given direction. And in truth, the band probably does not give a damn any which way. Also, the ever changing style and direction keeps the spice Nemesea is providing red hot and the dish they are cooking highly interesting. It is part of the kick getting one of their records at all.

Now, on a more upbeat note, Manda Ophuis really racks things up a few gears in Uprise. The way she now uses her vocals is a distinct step forward over her former performances. She shines throughout the record with rock solid musical prowess. And the mixers and masters have understood that, bringing her to the forefront, the way it should be. Kudos to Guido Aalbers (Giesound Studios Zwolle) for mixing and Darious van Helfteren in Amsterdam Mastering for … well … mastering. As the saying goes, if the production/mixing job is well done, then the mastering piece will not lack neither. Proof.

The band lost two members along the way, now down to only three: Manda Ophuis for leading vocals, Hendrik-Jan de Jong (guitar, keyboards, vocals) and Sonny Onderwater (bass, keyboards). And a ghost is seemingly playing the drums or is it a drum machine? Actually, it appears Steven Brouma having been active for the band until 2011 stepped in and covered the percussion for Uprise.

And it shows: The drum work really contributes to the quality of the record. Never overwhelming and not overwhelmingly complex, the drums pull this steamer through this Gracht of Amsterdam at a stiff pace. And this is a good thing: ‘Cause the somewhat frugal guitar contribution cannot really be it. Total absence of any solo, some riffing – the rest more of rhythm guitar work than anything else.

Now what does that all that mean for the tracks?

Hear Me gets you a first sip of this new brew Nemesea were cooking for a long time. And it is Ophuis’ proof of the pudding and for sure got this track selected for review. The follow-on Twilight serves you with typical Nemesea fare, something very akin to what we already heard somewhere before in one of their productions. Things are heating up a bit more with the Within Temptation-esque Forever.

A little later you will find the center piece Let It Burn. A dark tune, dripping underlying sadness and a certain confusion. The following clutch of tracks kind of loses steam, providing a more mainstream Nemesea fare.

But then luckily and similar to Allein in The Quiet Resistance, the 2nd before last track Bones turns out to be one of the more experimental songs on Uprise. They still got it in them, when they want to. So, why they did not deliver more of that stuff in the other tracks will forever remain a mystery to me. Because THIS is how they should have sounded from the outset. Powerful and rocky, sprinkled with metal. Stellar!

Now, what have we caught ourselves?

Uprise does not disappoint. I would even consider it one of the best and well rounded albums they produced so far. But clearly the record does not get my juices flowing the way it should. Professionalism got an exponential increase and again this proves that we have to do with seasoned musicians knowing their trade.

To me Nemesea do not grab their full potential (again?). The tracks are rocky alright, but I am missing the sharp edges and needle points. Rough surfaces and sheer cliffs to hang from. For the moment all is a bit too much on the safe side, locked into this sterile chamber of theirs. The band has much more oomph to play with in them. I just wonder why it does not come out.

Editor’s Note: This record successfully made it onto the Intermittent Digest IV. Well done.

Author’s add-on note March 2017: Manda Ophuis left the band later in August 2016. It is now clear where the openly perceived strange undertones came from all along. As usual, impressions are almost always correct.