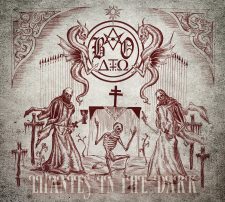 Nary a year after having released their latest full-length album To Below and Beyond, the Italian Doom Rock and Metal band Black Oath are back. This time with an EP – a short blurb called Litanies in the Dark.

Short as it may be, it is an interesting piece of rock with a mighty metal injection. Their crystal clear style moves around tempi and moods, sometimes a bit faster and at times slow as they should.

And for once it is nice to hear clear vocals in this genre. All this buried in meaty, slow, pounding rhythms that will beat you onto the ground, and brutally march over you.

Black Oath inject enough of their own style into Litanies in the Dark to counterweight the biggies in the trade like the Peaceville Three. You won’t find any of the copycat that is somewhat prevalent with other bands. So, they maintain their own identity in this embattled genre. That alone is a reason to give them a serious listen.

I would like to point out the medley tribute to the late Terry Jones of Pagan Altar aptly named Reincarnation of the Highway Cavalier. Some great riffing and soloing in there. Not too doomish, more leaning towards Heavy Metal and VERY juicy.

The self-styled Cursed Doom band Black Oath started their career in 2009 with a self-titled first EP. Since then they produced three full-length albums and a score of EPs and singles.

Now, back to the record. Good stuff, I like it.