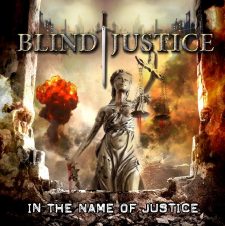 Okay, let’s be clear: This is about the Greek band called Blind Justice. Not the hardcore punk nitwits from New Jersey, or the folks from the UK, Italy or wherever they all come from.

And whoever said that time machines don’t exist?

If you like your Heavy Metal featuring a ’70s/’80s style with some juice to go, then Blind Justice (the Greek outfit) and their debut In The Name of Justice is a band to lend you ear to.

For those familiar with the band, yes this is indeed their first official album. The band started way back in time in the late ’80s, but only produced a few demos so far. Main reason being that the members were busy in other projects.

Now, probably deciding that late is better than never, they compiled stuff they produced over time, added one new track and landed a cover song. Manowar’s ballad Master of the Wind – no less. And pretty well done too.

In the Name of Justice delivers a refreshing retro-type of Heavy Metal. Complete with Iron Maiden-esque galloping tunes and flavors of old-style Judas Priest.

Whilst all this buzzing around the Heavy Metal baggage train definitely has room to improve and is a tad frazzled around the edges, the ballads, soaring solos and a lot of meaty riffing manage to convince. If only the master would not turn out to be such a mess. This could be os much better.

Blind Justice thus end up to deliver a consistent groove that renders the record a pleasure to listen to.

So, to enjoy this hodgepodge of metal offerings, leave the iffy, resin-laden Retsina and the unspeakable Ouzo on the side and go directly for a bottle of Raki.

Straight up on the beach with boomboxes blazing. Yes, the old-fashioned ones. Best enjoyed that way, trust me.

Wanna find out by yourself? Check this out: