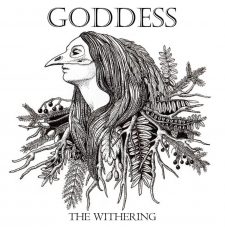 Sometimes things are simple. The tune needs to connect straight with yours truly once you start looking into a band and go viral in your head. And this just happened with Goddess from Norway.

They will catch your attention with a goofy style mix of Stoner Rock dude meets Death Metal brute, wrapped into an 18-minute blurb of only one track. All this burnt to disc on their first and re-released EP The Withering, let loose onto the world this March 2016. I kid you not.

We already had this one-track madness way back in time from bands like Mike Oldfield or Pink Floyd until it ran out of fashion. Kind of kinky to do that these days, but also very courageous from an unknown band.

A first digital version of this very same material was already recorded back in 2014 in Oslo on a recording school’s label (goodness me..). This here new update has been released on guitarist/vocalist Alexander Mora‘s label Voidcaller Records, remixing and remastering the original material.

Hacking away in typical, but doom-laden Progressive Stoner Rock fashion with a kind of Sabbath-ish relish to it, you’ll find all of a sudden harsh vocals spookily jumping in. You know, to add some spice and stuff. And this is what renders their brand of rock alluring.

Since its inception in 2010, the band released a demo in 2011, culminating in this new record. Now, when is this full length going to come out?