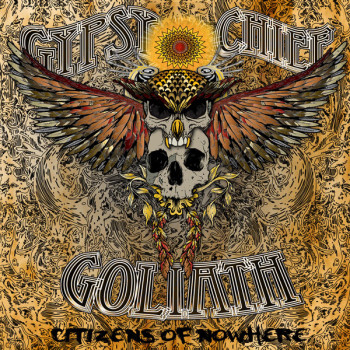 And true to their style, they mix Hard Rock and Heavy Metal with bluesy and psychedelic influences into a very alluring amalgam. To the point that I want to break out Easy Rider, but wait – the music on that one don’t really fit neither. So, nope.

Now to produce this sound, the band went analog on a reel-to-reel tape at Sharktank Studios in Windsor, Ontario. You know, these ancient turning wheels with a tape running in between that youngsters of today seem to think come from the Middle Ages or some other dimension.

By doing that, however, Gypsy Chief Goliath added authenticity and dimension to the sound that is frankly astonishing.

Citizens of Nowhere features 11 tracks with an airtime of just under one hour, the bonus being a Black Sabbath cover of Killing Yourself to Live of the LP Sabbath Bloody Sabbath.

A worthy successor to their 2013 release New Machines of the Night. I really liked what I heard.