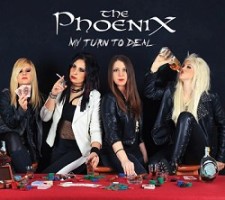 The Italian Hard Rock and Heavy Metal band The Phoenix just got their new debut EP My Turn To Deal off the ground this February 2016. Pri Studios in Bologna handled the recording.

The band features a somewhat old-fashioned and traditional rock and metal style that is refreshing to hear in this world of endless and endlessly changing metal flavors and nuances.

The Phoenix came into existence back in 2011 and reach us from two locations, both with their own share of attraction: San Marino (not on the beach) and Rimini (very much on the beach).

Over the last years, they played around 100 events, showcasing covers of other bands as well as own material, mainly in Northern Italy and Switzerland. This effort is now crowned with this here first release.

A taste of their powers, plus this one as well, if you wish. Enjoy!