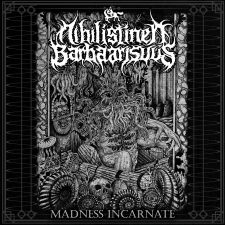 Today is the day for a juicy slab of blackened, hypnotic metal madness, I declare.

Then you must join the wusses in Corpse Ripper’s realm and be condemned to listen to their punishment eternally. All others need to check out Nihilistinen Barbaarisuus and their short blurb Madness Incarnate published earlier in 2016.

Based in the US, but rooted in the cold North of Finland, Nihilistinen Barbaarisuus formed in 2012. Running up to the current record, the band produced a number of EPs, demos and two full length albums.

At first their tune comes across as a bit repetitive, but then the rich, meaty riffs and a frankly surprising song structure start denting away at your armor. All of that enrobed in a Black Metal style that dwells just this side of ambient, before turning atmospheric. Combined with a large shot of Progressive Black Metal, this hellish brew has the tendency to get under your skin and spin out of control.

If anything, the EP somehow lacks coherence, kind of presenting a patchwork of different themes and directions. Clearly with Mika Mage in charge and being the sole survivor, the huge list of guest contributors – many of them ex members of NB – tells us a story.

This is clearly a motley selection of tracks that somehow awaited publication from different eras, but by and in itself creating an interesting album. As to the tracks, Traversing the Frozen North mostly stays on style, whereas the other tracks – whilst still blackened – refreshingly veer off to progressive land at times, barely hanging on to their ambient roots. With the exception of the acoustic Comte Sponville that don’t fit into any box.

But the sum of all parts provides spice enough for you to continue listening.