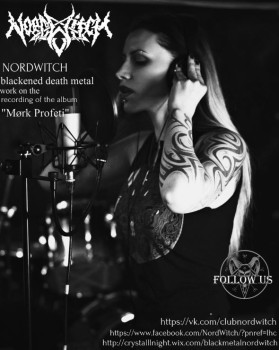 We talk about NordWitch, the Blackened Death Metal band from the cold East – Ukraine and Hungary to be precise. The band formed in February 2015 and started to produce some exceedingly powerful material. Their concept bases itself on satanism, occultism and mythology of the ancient Scandinavia. By Loki, I like that.

The band’s foundations were laid by Mary Crematorium (vocals) and guitarists Max and Leo. All of them experienced musicians, they bring with them knowledge of some 10 years of musical projects already. NordWitch are now working on their newest concoction Mørk Profeti.

A band to be watched! They may be back on the RockmusicRaider!