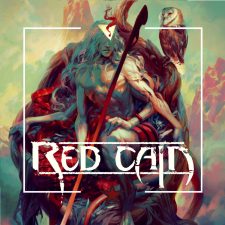 Let’s wallow some more into the Progressive Metal swamp that got quite some attention lately at RMR.

But to safely get there we need to perform some magick: First take two large spoons of progressive. Then mix with a large dose of groove, and lavishly add a goodly shot or two of Moonspell. Heat the cauldron, bring to boil and stir well.

Then sprinkle with some groove, and you got yourself the self-titled debut EP brought to you by Red Cain. And it is powerful stuff waiting for ye that risks to blast the socks off your feet.

The Canadian band from Calgary just re-emerged with a new lineup after a two year breather. Red Cain whomp forward with this really potent and dark Melodic Metal style. The band ain’t shying away from experiment neither and hit you with a fairly aggressive and massively complex four track attack of some 24 minutes.

They started out as an Industrial Metal outfit back in 2012 and now morphed into a more melodic/progressive kind of style. With clearly visible European influences, I might add.

As always (and unfortunately), there are flaws too. In this here record the inherent compression really hits the ceiling in some parts of this blurb, quickly threatening to overwhelm the system you are playing this on.

However, the way they thrashily surge forward is just irresistible. I particularly like the band’s credo to mix Pagan mysticism with steely metal riffs and solos. As the band rightly says, this is – and I quote “…heavy, groove-filled instrumentals plus evocative, rich vocals, all creating a memorable and dramatic musical experience…”.

I couldn’t agree more and can’t wait for that full length album to emerge, hopefully soon.

Wanna find out what groove Red Cain is offering this time? Check this out: