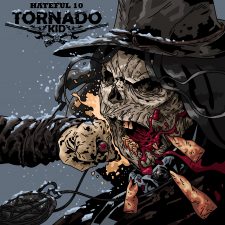 It is variety that got my attention first and their tongue-in-cheek genre description of Booze’n’Blues on their Facebook page. Then the corniness kicked in – profanity and blasphemy galore included.

And next came the interesting title Hateful 10. Going by the lore Tornado Kid tell us, they were so fed up with painfully re-doing their 10 tracks of musical prowess for their first full length, they started to hate it. So, they went ahead and changed the name from Cowboys of the North to the aforementioned Hateful 10 moniker. Cool story and as the Italians say: Si non è vero, è ben trovato.

The inside of the disc will surprise you, though. They mix hearty, somewhat grungy punk rock with some bluesier stuff. Then again veer off into Hard Rock country and plow on with some Hardcore at time. For some moments, they even try themselves at Heavy Metal.

Yet, the punk side never quite leaves. The only thing missing is the much announced Southern Comfort, albeit the Southern Metal element presents itself in some rudimentary and subdued form. After all they reminded me a tiny bit of Vinyl Hero – the sun-drenched Canadians.

Whichever the case may be, this results in an interesting mix of 10 short blurbs that – I daresay – never gripe and never bore you. And then there’s the lyrics. Okay, some of that is debatable, but tidbits like “…time is a bastard, life is a whore…” just made me laugh out loud. Besides of it being true, of course.

Tornado Kid formed in 2013 in St. Petersburg in Russia (not Florida) and released a variety of EPs to date. True to their credo covering a variety of styles and nuances. Now this decidedly very short first studio album quite adroitly summarizes their savoir-faire.

So, here we got ourselves a street band that just stepped out of the garage. These guys really relish making music and having fun at the same time. I really like the freshness and blunt kick their 10 tracks deliver.

Taste this and witness the death of the pink television:

This video and many others can be found on the RockmusicRaider YouTube Channel. Check out the playlists and hit SUBSCRIBE.