It is again time to halt our march towards the lands of rock and metal. To summarize what happened over the last few months. And at first we thought that the selection of material for Tome VIII of the Intermittent Digest was kind of meager.

To the contrary, we have material galore and it is high time to follow up on the Tome VII edition and to describe what got under the deck crew’s skin at the world-famous RockmusicRaider office suite. As always, Tome VIII is not a top ten, but a slice of records that we found over the last months.

Here is what happens if you let a French novel writer with a penchant for the occult compose a Black Metal album. Geisterfels happens, in its unholy incarnation of La Névrose de la Pierre. The author allied herself with French Black Metal masters and off they went into the unholy abyss. The outcome was a refreshing, kind of traditional piece of trve Métal Noir. All of that dreary fare presented to the audience on a platter of subdued shades of black. Very tasty, and quite a surprise on this blog.

But Geisterfels are not alone in their chase for traditions. Helrunar and their vanity piece Vanitas Vanitatvm really dug about the dark and long forgotten realms of Scandinavian Black Metal. But in the end, this German band really got us a piece of metal so hot, we were unsure if Black Metal only would still suffice to describe this record. Whatever the case may be, this album gorges with exquisite intensity and a quality of Black Metal that we thoroughly enjoyed.

But this unholy journey into the realm of blackest metal joys was not without further surprises. Second To Sun and their newest record The Walk just kicked it up a notch. Truly, this is Extreme Metal on a Black Metal platter that the doctor ordered. The record sports many similar qualities the latest of Dodecahedron displays. But the band injected enough added spice to make a difference. Made in Russia, and delivered to the trve metal adept. With an unholy attention to detail seldom seen this side of the Ural.

Now, Black Metal continued to fuel the blog with further unholy fervor. This time with Oubliette that sent us The Passage over the pond. Greetings from the Bible Belt, Tennessee to be precise. Don’t I always love it when we get juicy Black Metal from this corner of the world. Flies the prevalent bigotry in the face big time. But malicious glee apart, the record is a starkly precise and powerful piece of evilly dark metal. Not necessarily in the traditional sense, but by mixing a variety styles into their tune. A mighty black stew indeed. And – I daresay – a contender for a spot on the upcoming Top 10.

German despair, anyone? By Loki, it really looks like the nice, sunny summer of ’18 did nothing to quench our thirst for the darkest of metal. To the contrary. Because we really took a liking the brand of Doom Black Metal Die Letzte Agonie of the German band Arkuum dispenses. Embedded in rock-solid Atmospheric Black Metal, the throaty rasp and dreary landscapes did not let us go until the last note was consumed. But what else can you do, once this tsunami of sorrow and grief hits you?

There is indeed an offshoot of the Neue Deutsche Härte (NDH) in the US. Even if that is hard to believe. Hanzel and Gretyl get us some corny, metallic fare in the form of Satanik Germanik. A head-banging mix of Industrial Metal and truly dark Black Metal. All of that laid on a bed of melodic … something and abundant weirdness. So, how could we resist such a record, even if their German skills need a pretty sturdy update. AND I had some serious reservations about make, structure and attention to detail. Yet, despite all that annoying detail, our crew thoroughly enjoyed going after this band and their nonetheless pretty tasty morsel of red-hot metal.

Then we could not help it – again. The ghosts of the past cannot rest with the RockmusicRaider deck crew intervening all the time. This time the victim was the now defunct Nevermore with their iconic piece This Godless Endeavor. It turned out to be a contentious relationship until we could show the record some love. But hey, this band was, after all, Jeff Loomis‘ alma mater before he joined Arch Enemy. So, something must be good in there? But fear not, the record finally revealed its qualities to us. In a big way. 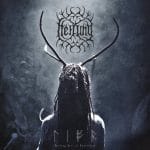 And speak about reaching into the past. This time not as a record goes, but in the form of – as they call it – amplified history. I am still not sure what Heilung really means with that, but Lifa – the outcome – is more than noteworthy. Live albums are rare on the RockmusicRaider blog. But the outstanding stage presence of this band really convinced the High Court of the RMR realm and landed them an official review. This mix between a ritual and remnants of Neo Folk captivated us to no end. And continues to do so to this day.

But too much gallivanting about the darkest realms metal can offer is definitely no good on the long run. So, we decided to get Vicious. Brought about by Halestorm, Lzzy Hale‘s abode. The worry of yet another lukewarm record quickly dispersed. This one surely is Lzzy’s most explicit record to date, but also one of the most passionate. And don’t we like that over here. This is exactly what we came to Halestorm for, and so should you.

And you know what? Sometimes we are relieved, too. The RMR deck crew got a bit worried after a while, because they just could not get warm with Unleash The Archers screaming about the desert, Mad Max style. So, finally we got around to looking at Apex, their 2017 piece. Kudos to a style much more mature and thoughtful than the 2015 record ever was. This one brings the many talents this band has in the Power Metal arena much better to the forefront than any other of their albums before that.

Already the Rorschach test on the blood-red cover got our attention. One of the highlights in the 2018 Progressive Metal scene definitely was Haken with their newest record Vector. Complex, yet thoughtful at the same time, this band is – as usual – hard to beat. They artfully mix all sorts of progressive elements together, lest you accuse them of djenting their way through their metal lives. But not so. This is yet another noteworthy album of a band that does not cease to amaze. If or if not they will make it onto the 2018 Top 10 remains to be seen, though.

Okay, this will be the end of the Intermittent Digest – Tome VIII. I realize that we have much more stellar material, but this must wait to the next edition. Stay tuned and rock hard.