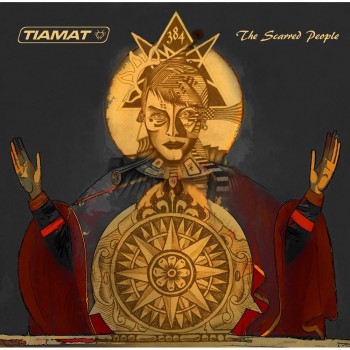 You know what? The Swedish band Tiamat‘s 2012 album The Scarred People sounds like Moonspell on a sunny day. Minus the evil menace the latter exude throughout their productions.

I know, the Moonspell line was already present on the Wildhoney review, but what can I do? You could also argue that it is some weird mixture of Type O Negative and The Sisters of Mercy.

The stylish turncoat attitude is very prevalent with Tiamat. Yet, whatever you would like to say, this is one of their strong points. They clearly do not want to be put into silos and I like that.

But what a difference from The Scarred People to Sumerian Cry, or – again – their aforementioned masterpiece Wildhoney. Whereas you’ll find similarities to the latter with this 2012 offering.

In a way you need to salute them. Never a dull moment when discovering a new album. But I had my issues with this record from the beginning. It is for sure well produced, kind of the music you would listen to when reading a book, not taking notice from what is there.

WHAT? What was that?

It is exactly that. I have now listened to The Scarred People for a while. Louder or less so, in cars, on headphones, thundering through boom boxes, you name it. And it surely does have its moments. But more often than not, you are looking under the table or around you to find the friggin’ button used to turn up the juice.

It is just not growing on me like other albums do after a while. If there is anything to be discovered, that is. Taking up the comparison with Moonspell again, The Scarred People does many of the things well, but is missing out on creating the energy that renders a record a good record. Not just something you would encounter in the coffee shop when ordering your eggs sunny side up – with beacon.

This is like someone dreamed up this stellar recipe, all good ingredients, and forgot … the spice. Some tracks even include some (listless?) guitar solos. And this is how this sounds like. All is there, but repetitive tracks, boring drum work and Johan Edlund sounding pretty much cookie-cutter from one song to the other. And some of that stuff – Messinian Letter – could have originated from the modern Pink Floyd. Apart from being just flatout boring. To be honest, a lot of that sounds a little like Pink Floyd. And that wreaks havoc with the quality of the album. Time to grow up, folks, The Scarred People is the .. 10th studio album. Forsooth!

And don’t get me wrong: The Scarred People is pretty flawlessly produced and offers well structured lyrics – in general. I like the dark connotation of all kinds that the album offers through the lyrics. Very mystical and religiously influenced in places. And I also fancy the slight ’70s flavor the album displays.

And what is there in terms of tracks on The Scarred People?

The Scarred People – the title song – displays a strange, hypnotic style to it that has a tendency to stick to you for a while. Interestingly, the psychedelic official video nicely projects the sense of unease this song produces. Winter Dream needs to be cited as remarkable (not more, not less). 384 – Kteis is probable the best track on The Scarred People.

Radiant Star needs to be mentioned for the lyrics and kind of a renewed hypnotic delivery.

After that it gets difficult to tell one from the others, and the quality of the lyrics starts to drop sharply. Thunder & Lightning is a favorite of many fans, not mine though.

The absolute negative is Tiznit – good gracious. What did the folks of Tiamat smoke? Yet, the goodness lies in the bonus tracks. Where – not surprisingly – you all of a sudden find little jewels like Paradise or Cain. But the latter two don’t really count in the overall rating, as they are not part of the official selection of songs.

Well produced, artfully delivered and lyrics basically on the upper quality side, The Scarred People does nevertheless not convince the way it should. I used the expression hypnotic twice in this review, and boring many more times. So, boringly hypnotic or hypnotically boring, underlined with listless riffs and very repetitive drum work.

This is probably how to best describe this album.

I do however feel the excellent talent this band possesses, but it is – at least for the moment – not well exploited. I will be on the look-out for their next record. If there will be a next time.

In 2014, Johan Edlund announced he was leaving Tiamat. But did he really? On a Facebook posting in July 2015 Edlund announced that eight songs of a new album are already written. Identity crisis or pure mystery?

I guess we will see.