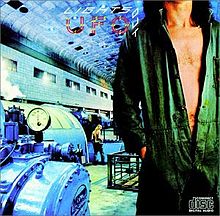 I admit, the British rock band UFO is one of my long time favorites. They have created great, great Hard Rock over time and helped pave the way into what is today called metal.

One of the best periods in the distinguished career of UFO are indisputably – what is commonly called – the Schenker years. Back in the ’70s, a super-gifted young lad, almost too young to be that good a guitarist joined this band led by Phil Mogg in search of a riff maker. Who better to choose than German-born Michael Schenker, a founding member of the Scorpions. Anecdotally, Michael’s brother Rudolf still plays for the Scorpions to this day. Michael’s relationship with UFO was spotty: His talent undoubtedly helped UFO to shine on the international stage. His personal issues – however – apparently created enough dissent to have him hired and dismissed several times over many years.

The first stint – the aforementioned Schenker years – were Michael’s longest continued and most productive engagement with the band. Out of the nine albums recorded with UFO, five of them originated from this era. The 1977 Lights Out is the fourth record of this series. Other albums of this serious were No Heavy Petting or – then again – Force It. Once out of UFO in 1978 for the first time, Schenker moved to found the Michael Schenker Group or MSG. That he never managed to stay for longer periods with the band is a pity.

Lights Out gets you this special brand of Hard Rock with a sharp edge and Michael’s super-precise guitar play. Straight and true with a crunch, but not as hard assed as AC/DC ever were. Nor was their style blues-tinted and bleary-eyed from drug overuse as Led Zeppelin and their ilk of that time.

The album Lights Out virtually bulges with stellar, vintage tracks, superb riffs ‘made by Schenker’ and powerful lyrics. All this is spiced up by rock ballads that we need to go look for these days first. They don’t make ’em this way anymore, unfortunately.

All these tunes are always interspersed with typical Schenker riffs that just take my breath away. If this guy just would not have been such an ass on stage and elsewhere, they could have doubled their earnings and gotten to totally different levels in their career. But more’s the pity, he left (or got left) from the band more times than I care to count.

Too Hot to Handle and Lights Out always take me along a journey back to earlier days, still after all these years listening to this record. Just Another Suicide contains a surprising riff that lightens up this track that would otherwise be bland.

And then there are the rock ballads Try Me and Love to Love – both of them hitting home hard. The former being about a relationship that did – probably – never happen and you can feel the emotions in Phil’s voice. The latter wanting to kill you with a super heavy, psychedelic, but extremely well executed intro first. Then trying to bring you back to reality with some wisdom about how a relationship can get lost in life.

I could listen to this track forever, mystical, slow, but rock hard, expertly delivered and interpreted. A real early morning wake-up-and-get-your-breakfast song. And I kid you not, this track gets my system going alright after a night of heavy music and booze. I listened to this track like a thousand times.

There are – as always and very unfortunately – some fillers in this limited number of tracks. For example Alone Again Or, which would have found a better home with The Beatles or gigs like Audience. Or it might have served as an entry into one of the infamous pop shows that were in fashion back in that time. You know, special pants, garish colors and all. Forsooth!

In conclusion, Lights Out delivers real vintage Hard Rock with an edge. One of the best records of their career and undoubtedly the best of this specific period. UFO featured a different style back then than other big, gifted bands employed. In a way, they were ahead. Recommendable! Oldies, but goodies. Right?

And indeed: The audience voted this record onto the 10 Most Popular Posts @ RockmusicRaider. And it made it onto the Old’n’Tasty series and the UFO Top 10 Songs list, too. Stellar.