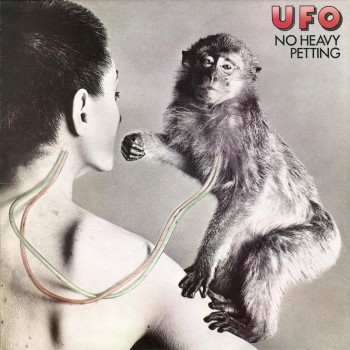 I do not know what it is with UFO (the band, not the friggin’ aliens…). On one hand they are brilliant, but on the other it is like – mediocre what they produce. And this very specific thread – at least – leads right through their early records. Their 5th studio record No Heavy Petting released in 1976 is no exception.

Now imagine 1976 for a minute: These were the times where you saw vehicles like the ‘Stutz Blackhawk’ come into fashion. No kidding: Big, gas guzzling monsters were all the rage at that time. Of course, you could also get sleeker machines they – the car makers – gave us in the ’70s – Corvette, Mustang, Firebird. Oil crisis of the early ’70s already forgotten. These were also the times of almost 15% inflation in the UK, earthquakes and tsunamis everywhere, Fidel Castro becoming president (he is still there at the time this review is written – well almost).

And in the midst of this you got Hard Rock that was all the rage too, mixed with the emerging Heavy Metal movement. So, cruising along the highway in your thirsty, big gas guzzler with some good hard rock blazing away was the best feeling ever. Of course, for today’s youngsters, this is like the dinosaur age, likely to turn up as fossils in the fucking mountains that are towering above us.

This was also the year when AC/DC released their stellar and début album High Voltage and Kiss kicked their fourth studio album out into the world, whereas Uriah Heep added to Progressive Rock prowess by delighting us with High and Mighty – well kind of. Black Sabbath gave birth to Technical Ecstasy – only hitting Gold in the US – not really a top performer. This some six years after their stellar début album Black Sabbath. The band’s namesake and what a piece of creativity.

It is into this mighty mix of influences that UFO landed another good’un with No Heavy Petting back in 1976 after their ’74 success Phenomenon – which really was that. Speaking of sound: Much better versed and displaying a much more meaty and powerful sound than others in the genre back in those flower-power laden times were able to manage.

Whilst still including a lot of fillers, No Heavy Petting clearly is a precursor to more glamorous things to come like Lights Out or Obsession a few years later. The album also sets cornerstones as to how Hard Rock needs to sound. Plus – I daresay – leading other bands to Heavy Metal as we know it today. On top, they also pulled one of the most amazing rock ballads called Belladonna – in music, deed and lyrics. The track was great back then, still is great today. But more to to that later.

1976 was part of the Schenker years, meaning the guitarist Michael Schenker, whose very precise guitar play shames many of todays guitar wizards still. I am absolutely loving the talent, whereas later he had trouble to establish himself. But what do you expect: If at 18 years of age – starting with Phenomenon – you are told that you are the greatest so many times, then this is what you believe. And it will show in later years. But you need to give him (a lot of) credit. The very precise riffs and solos in No Heavy Petting that he produced are absolutely stellar, no doubt about it. Just listen to the one on Can You Roll Her. He even pulled records like Reasons Love and Highway Lady out of the bad sector into the mediocre arena, simply because he adds this friggin’ solo that is just amazing.

And his influence shows in all of the tracks on No Heavy Petting. This combined with the excellent, high soaring vocals of Phil Mogg gets you a combination that you just cannot ignore. For the better tracks at least.

And then there is UFO‘s ability to throw out rock ballads. Holy. Fucking. Cow. Yes, you guessed right: Belladonna is probably one that is never gonna be topped. Subtle reference between the beautiful woman excelling in intrigues of the murderous kind and the poisonous plant of the same Italian name. Soft melody, powerful lyrics – and actually powerful does not describe it. This one is hitting home, like too near to reality to be comfortable. After all these years. No kidding.

Now, let’s not forget Martian Landscape written by Danny Peyronel, who by the way only stayed with UFO for No Heavy Petting. Pseudo country-style, mid tempo ballad, speaking of a still intact way of life in the countryside. Well, not bad and a fitting end to the record.

No Heavy Petting is a mixed bag of goodies. You have absolutely stellar contributions – of the Hollywood Walk of Fame kind – like Natural Thing or Can You Roll Her. Just to pull everything down with terrifyingly bad tracks like Reasons Love. This is a pity.

Judging by the talent that was afloat in the band at that time, UFO could have done better. I guess it is their exceedingly bad lifestyle back in this time that is at least partly to blame and may have taken some of their thunder and quality away. Still a good album and for sure a must-have album for the UFO fans around the world.

Editor’s note: The record successfully made it on the second installment of the Old’n’Tasty series. And on the UFO Top 10 Songs list. Congrats!