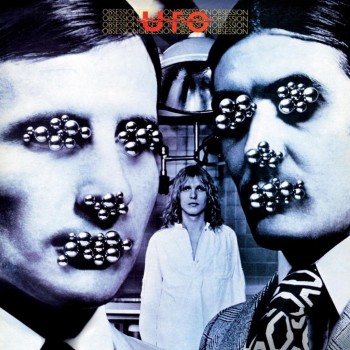 Obsession is the last album of what is commonly called the Schenker years in the UFO discography. Michael Schenker enjoyed a relatively short, but intense career for his first stint with UFO. Starting with Phenomenon in 1974 and ending it – from a standpoint of studio album releases – with Obsession in 1978. He for sure put his stamp on UFO and all that stuff they were able to produce in this relatively short time frame. He actually returned to the fold in 1993 for a short time – many years later.

And you know what? They did it again. Obsession is again different from Lights Out. I would say more varied. Also a bit less focus on Paul Raymond‘s keyboard interludes that became famous in tracks like Love to Love in the aforementioned album. I am still having shivers down my spine listening to that one. Mind you, he is still there on keyboard and at stellar levels.

How to describe Obsession better?

The album is more rounded and mature. But also less scratchy – well – with a tad less character and spice. Feels like a burner went out of action on this BBQ grill of theirs. But a very small burner at that – I admit

Phil Mogg presents himself with a swagger not known before, kind of throwing a stone or two into this mighty fish stew with spicy curry sauce. Very well done – I love the change. This was the kind of thing we wanted to see at that time. It appears that Mogg/Schenker functioned well on Obsession.

The courage to move out of their comfort zone – almost going progressive on me – is probably the main achievement of the band in Obsession. However, the loss of crunch and the lack of crusty tunes found in its predecessor I still deplore to this day. For some reason the record comes across as just a little too smooth, even if there is a helluva lot good stuff in this short 36 minute piece of vinyl.

Does this turn Obsession into a bad record?

Indeed not. However, the record starts off with a somewhat palsy Only You can Rock Me. And yes, you purists, I really mean it. This could have been so much better. Only Mr Schenker and his guitar prowess saved it and brought it back up again. It is too smooth to be really good. I am missing the juice, the oomph, the power. Something to sing along on a long beery evening. But again, not bad in itself. But I cannot help the vision of someone cruising along Malibu highway at night, blazing away with this song in a convertible with a Piña Colada in his or her hand, feeling cool. See what I mean?

Fortunately this is followed by a much more crunchy Pack it Up (and Go). And THIS is what I call scratchy with character. Not stellar, but refusing to be categorized straight. And impossible to sing along with this in the convertible. And just listen to the lead guitar – well – pulling this show along. Really cool. This is … Heavy Metal – at least its beginning. And it is this that will save them a decent star rating at the end of the review.

And then, when you think that they got it made, there comes along this – I don’t know how to call it – horror of my lost dreams. What were they thinking with Arbory Hill? This is of the same vein than Lipstick Traces on Phenomenon. Totally disconnected from the reality of the record, not sure of rhyme or reason. But I guess nothing is ever useless. It can still serve as a bad example. A perfect dafuq moment.

But this is fortunately followed up with Ain’t no Baby – a mid tempo concoction with stellar riff interludes, kind of bluesy and laid back. And then a soft rock ballad called Looking Out for No 1. And this makes up in spades for the failure before. Again, here we have proof that Hard Rock and Heavy Metal bands produce the best rock ballads. And then they throw in a reprise of the same song on the B side, instrumental – keyboard very prevalent. Born to Lose is another pretty good ballad – kind of the proof of the pudding. And what a solo towards the end.

The remaining spots are taken by traditional, standard Hard Rock tunes, again delivered in this new, energetic style that seems to permeate the whole track list. If a choice needed to be made, I would vote for Hot’N’Ready as the best track of this pack – very cool Hard Rock. And you know what? Some of that series sounds like something Whitesnake might have produced.

Cherry – in the middle of the B Side – is the second real disappointment, not something UFO should have added to Obsession. This is the only really bad track, even if a guitar solo tried to save it somehow. This song, along with the botched Arbory Hill, are the only real negatives in an otherwise very successful production.

So, what have we got?

Obsession is for sure not UFO‘s best album, but one of the most mature with a swagger to boot – at least at this point back in time. I really like the oomph Phil puts into his tunes, a real step forward. At the end of the day all stands and falls with band performance – and this is just stellar. This – combined with great guitar work – makes Obsession one of the better records UFO ever created. But for sure not THE best. But this type of evaluation is – as always – a tricky one and remains in the eyes of the beholder.

Ed’s note: Oh, and don’t forget to check out the UFO Top 10 Songs list and the 2nd edition of the most popular posts as well.

Cherry was my favourite track on this album

This site uses cookies. By using the site you agree to use these little helpers. If not, please adjust your browser or leave. Thank you. Disclaimer and Privacy Policy
Menu
wpDiscuz
1
0
Speak Yer Mind, don't be a stranger!x
()
x
| Reply