Well, I have dabbled in Progressive Rock and Metal for a while and more in the modern theme of things, if we can call it that. But far into the past, there already were jewels that we tend to forget. Salisbury, the 2nd studio album of the olden times Uriah Heep is one of them. The band’s name derives from the Charles Dickens novel David Copperfield. Actually the antagonist hero in the story, no less.

Starting with ‘Very ‘eavy, Very ‘umble’ – the band’s first record ever – Uriah Heep went on full progressive mode with Salisbury. Actually, this piece of work – I am tempted to call it a masterpiece – was way ahead of its time. Most of the other gigs liked to produce the flower power induced and drug infused bullshit that was staple at that time. And others LSD’ed themselves through Rock and Hard Rock with sometimes spectacular and at other times spectacularly bad effects.

This was – by the way – considered cool, so go figure. And here we finally got some quality song writing going. But believe me: Back in time when this came out – nada. And the comments the band had to endure at that time were pretty bad. On the other hand, Salisbury charted at # 1 in Finland. The land of the future metal scene of the ominous kind. Germany came in at rank 31, whereas the reception was a bit mixed in the United States.

And Salisbury would only be half-finished without this trademark orange cover with a Chieftain tank supposedly driving through the Salisbury Plains. At that time and still today a military playground in the good old United Kingdom. Unfortunately the US version was somewhat different and not to my taste, with a different cover and a slightly different track selection – a failure in my view. So, this here review will focus on the European version.

We were all thinking back in time that these guys – meaning Uriah Heep of the bizarre name – were kind of weird, but still good. Never suspecting that this would turn out to be one of the most controversial and inspiring albums Uriah Heep would ever produce. With an orchestra to boot, no less.

And think back to 1971 for a moment: Jethro Tull just released their 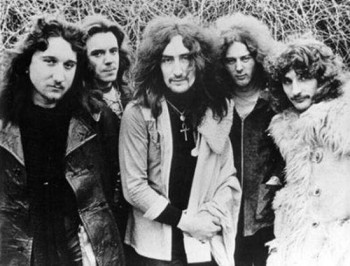 ultimate career booster Aqualung. This was also the year that Led Zeppelin unleashed Led Zeppelin IV (yeah, baby, stellar that). Hell of a name by the way – meaning creativity up their mutual asses at that time. But the fuck they cared back then. And rightly so, if you look at the success this record mustered. And Black Sabbath got rid of Master of Reality, another good’un.

So here we got the stage set against an almighty competition that was the emerging Hard Rock scene.

And Uriah Heep did well with Salisbury. Let there be sound on the Salisbury plains, and it was rather strange!

This is the first impression you get when starting on the album. First they speed away with Hard Rock bordering on Heavy Metal (or vice versa) with Bird of Prey. Furiously fast, just to be greeted by a bunch of falsetto voices, the mother of all nut-crunchers. However, the whole track proves funky enough to retain your attention. This is followed by a ballad called The Park. All full of birdie sounds, sweet, soft music going with the flow – and further down the falsetto road.

The whole start to Salisbury is actually shocking (or at least it was back in time). The change in style being so drastic compared to their first album – and also the later ones like the famous Demons and Wizards or Firefly. Okay, we already had some rare falsetto shenanigans going on, but not at that level of progression. All of this with some pretty good keyboarding, for the time really progressive drum work. And – last but not least – the lyrics delivered by David Byron. Mick Box on lead guitar and vocals is actually with the band to this day.

Lady in Black really hit hard in Northern Europe, one of the major hits back during this time. This one is interpreted by Ken Hensley, crunchy melody and hearty lyrics included. I remember that this song played forever in the charts. Actually astonishing for such a simple tune.

The center piece is really at the end of Salisbury. A 16 minute epic concoction called – well – Salisbury. An early version of Symphonic Rock of the Progressive kind with a full orchestra, at a time when the term actually wasn’t yet invented. Again, full-fledged Prog Rock – not something that hard-core Rock fans will necessarily enjoy. But really well done and rather surreal at the time that this was created.

You know, for the simple fact that Uriah Heep were courageous enough to go full tilt Progressive Rock on their second release is one of the reason why I love this record. And it indeed has its stellar Prog moments, with precise riffs and solos that will delight you, changes in tempi and structure from one moment to the other.

Salisbury is revolutionary in this sense for the ’70s. Most of the other bands were going down the rock road – admittedly with exceptions. The tracks found on Salisbury are innovative, well constructed and crafted with fantasy and passion. It is – by all means – not your usual Uriah Heep album and for sure not their most energetic one. But worth of every one of the somewhat short 38 minutes of pleasure that you are going to get out if it.

Ed. note: If you would like to find out how the individual tracks on this album fared, do check out the Top 10 for Uriah Heep. Or – failing that – visit the latest issue of the Old’n’Tasty series or the 2nd edition of the most popular posts.