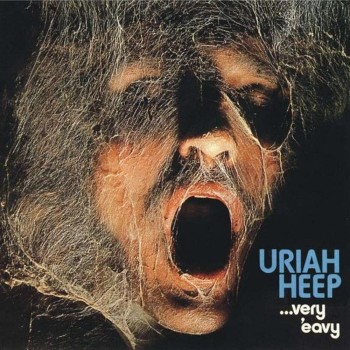 …Very ‘Eavy …Very ‘Umble just takes off like a rocket with Gypsy straight into Uriah Heep‘s debut album back in 1970. And what a debut! Starting a first ever album with a hit straight away is a feat not easily repeated. Stellar!

Of course with David Byron‘s pipes, Ken Hensley handling the keyboard madness and other things. Okay, he did some of the vocals too. Plus you got Mick Box doing the usual stellar things with his guitar. So, all should be good. Right? Well, not quite.

Because shortly after Gypsy ends, you kind of go ‘Now What’?

‘Tis a mixed bag for you. Not surprisingly the album was not too well received (or not at all well received) at first back in time.

As some reviewers suggested, …Very ‘Eavy …Very ‘Umble was probably a bit ahead of its time (very diplomatically speaking…), going progressive on folks and all. And this overall feeling comes complete with now world-famous dumbest statements from renowned music news outfits. Just think of the venerated Rolling Stone Magazine with Melissa Mills, who wanted to commit suicide, if they’re going to make it. Claiming it to be “watered down, tenth rate Jethro Tull”. Or something, I kid you not. And she paid dearly for that remark with the band bickering about it later at all occasions. And all sorts of reviewers writing about it – still today. Yours truly included.

But these were interesting times too. 1970 was actually a rock hard year: Black Sabbath started with their debut in February, followed by Paranoid later in the year. Led Zeppelin released their no III. Endless is the list of well-known names having released albums that very year. Not to forget The Beatles with Let It Be.

And in truth, you really have to dig deep into this bag of wonders with a lot of patience. And suffer through some endless careening around corners, just to get to the jewels of this production.

The trouble already starts when you pick up the disc!

The cobwebbed face on the cover really sucks. It is actually David Byron‘s countenance, it appears. Very ugly, not sure what devil drove them to THAT decision. Then – same as with Salisbury – we start to hit some inconsistencies with cover versions across geographies.

I really don’t know what on earth their problem was to issue different versions of songs and cover art for the US market. Apart from the glue-infested face, I can for sure detect no breasts or other indecencies. The …Very ‘Eavy …Very ‘Umble US cover actually features some sort of a bizarre snake – black on white. They also dropped Lucy Blues and replaced it with a crappy version of Bird of Prey AND changed the name of the record to Uriah Heep. Not very creative and actually boring! Snore!

So this review will focus on the European edition! Same as the aforementioned Salisbury.

Not easy to listen to, …Very ‘Eavy …Very ‘Umble will first turn you off – before it turns you on. It will really take some time and patience to open your spirit and listen to this – well – progressive piece of music. And it is so difficult to digest because it changes styles so frequently. The record moves from Heavy Metal to Hard Rock, switches to some Blues Rock and then again go Jazz Rock on ye (or well kind of..). But finally at its rocky heart, it is Progressive Rock and Metal.

The first track Gypsy makes you wonder where the hell this is all going. But hold on fast: ‘Cause all of a sudden the track takes off in this stellar rhythm that has become one of the staples of Uriah Heep. Pretty much launching their heyday career moment right there, which was to span for another 10-12 years before they basically became a cult band.

Mind you, they are still here today able to command large audiences, albeit only with Mick Box as the only original and ever lasting member. Gypsy includes one of these delirious Deep Purple style keyboard attacks. In this day and age, you would be facing a guitar solo. But not so back then with this band. The guitar interlude only comes in at the very end, but this is jolly well executed. Would still rock in today.

Come Away Melinda – sounds like a crime Barclay James Harvest should have committed. A soft track coming away as a tad too strained. Not fitting the energy that we had before – or after. Yet, the most amazing piece of work on …Very ‘Eavy …Very ‘Umble is the aforementioned Lucy Blues. As the title suggests, a juicy morsel of Blues Rock.

Noteworthy is the Hard Rock piece Real Turned On. What however really threw me is Wake Up (Set Your Sights). You think you heard it all and then they hit you with some sort of Jazz Rock. Oh, and the only thing that saves I’ll Keep on Trying from doom and damnation – by the way – is the friggin’ stellar solo in the middle, plus the somewhat more interesting song construct with a lot of tempo changes and hooks.

In conclusion, …Very ‘Eavy …Very ‘Umble is neither very good, nor is it very bad. Whenever I listen to the record, I get this impression of a ship at sea. And the captain just threw the compass over board. Plus there are these awful psychedelic bullshit interludes that just drive you crazy, a decease they could not get rid of for a while.

Most remarkable is the change of style to their next album Salisbury that will see the light of day only one year later. Totally different and in a way even more controversial than this album ever was.

Don’t start with this record on Uriah Heep. This is light years away from the Hard Rock that made them famous later. It is however what it is: A debut, a start without much direction yet. Indeed with many very good, but also many not so good elements in there. But with great things to come: An amazingly capable band of musicians in search for the right path to fame.

Ed. note: If you would like to find out how the individual tracks on this album fared, do check out the Top 10 for Uriah Heep.