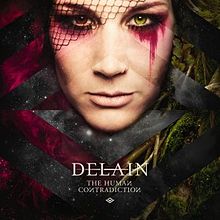 Well, how to classify Delain‘s latest concoction The Human Contradiction? Still Delain, but a more sanitized, more mainstream version of their former, fresher self. And with former I mean before the album We are the Others that got itself a bit too much into the Pop Rock arena for its own good.

Their 2014 and 4th studio album The Human Contradiction very much reminds oneself of the look and feel of the latest Within Temptation development, but – perhaps – this is way too simplistic. Methinks that they actually did better than Within Temptation’s Hydra, which is and ever will be a mediocre record.

The band seems to have learned from the sometimes harsh feedback received on their last record and tried to turn this around. Now much rockier – indeed containing more solid metal than before (not always, but in many places). The tracks have a newer and fresher energy to them.

And – as always and – as is their credo – to increase the quality, the band solicited the help of guest contributors. Marko Hietala (Nightwish and Tarot) for one. He is actually more or less a standing member of the band, even if he is not. And the cute Alissa White-Gluz (newly Arch Enemy, just handed over from The Agonist) lending a few quality death grunts on the other side. There are a few more growls delivered by George Oosthoek, but kind of displaced and of bad quality. They would have better refrained from those. Definitely not a quality addition.

I am missing the hard edges and surprises in this record. The guitar chugs along okay, but not more. And the drummer kind of follows the flow. Where are the big friggin’ solos, guys? There is really not much in terms of pushing the envelope, no desire to be experimental. Kind of building on old values, doing what they are most good at.

The whole album sounds like some smoothly running machine – well produced and processed, ready for the mainstream music stomach, no indigestion possible. So, in desperation you would like to turn up the juice, but you cannot find the friggin’ switch! That pushed the annoyance levels of yours truly real bad after a while. And somehow they lost (or sanitized away) the fresh Delain sound that was displayed so prominently in Lucidity or April Rain.

Pretty good are Here Come the Vultures, My Body is a Battleground and Stardust. The Tragedy of the Commons is quite metal and rocky in places (this is the one featuring Alissa). And I hate to love it somewhat, even if some of that stuff sounds like some kind of musical. Good grief! For sure they could have used Alissa’s talents better in this record.

Sing to Me contains some good passages; no doubt when Marco is contributing, you usually see an increase in energy levels!

And I do love Scarlet – the soft ballad contained in the bonus tracks. The lyrics however elude me somehow. I guess, I just don’t get it, born dumb learned nothing. But ’tis a good track to ease your metal-laden ears some.

So, The Human Contradiction is not bad at all, but not too cool, neither. I hope Delain will improve their style some more and get away from this kind of sanitized version. It does not need to be darkest Death Metal, but they could use a bit more character in their tune. For now it will still satisfy their fan crowd.

But will this also be the case in future?