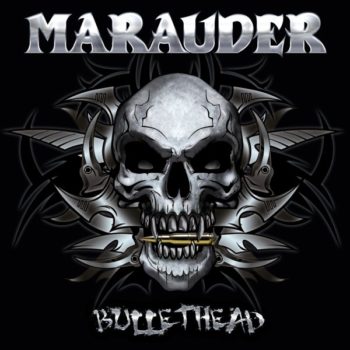 Screamy vocals, lead guitar, rhythm guitar, bass, drums – zero keyboards. At least not much of it.

Hmm! This would usually be the recipe of which Heavy Metal is made of?

And truly so, the Greek band Marauder graces us with their 6th full-length studio album Bullethead carved out of a block of solid, steely metal.

Their brand of Heavy and Power Metal really cuts it down to bare bones only – most of the time. Riffs, licks and solos evoking memories of Iron Maiden without the screams of Bruce Dickinson. Delivered in a somewhat scratchy, gruff way to boot by the new frontman Nikos (Mygas) Antonogiannakis. Mix a few parts of Black Sabbath, Dream Evil and Krokus into the fray, and you about got the idea.

All the woozy stuff other bands like to put into their tune sometimes out of total delirium is just not present. On top, they got rid of the cheese quite prevalent in Elegy of Blood, which is another positive.

And all of this is good. Yet, it leaves you with something that we for sure all heard before. With enough of their trademark meaty crunch to keep things very interesting in a genre that is considered stale. To very close to (un)dead by many.

None of the tracks are shorter than four minutes, which means they did not jump onto the commercial bandwagon too much. But this is also often a sign of superior quality. And true to their Power Metal flavor very prevalent in this record, they also have this somewhat eerie ability to churn out catchy hooks and melodies.

Marauder seem to be mainly known in the Greek metal community after all these years of existence. There are also a number of other marauders, Merauders and what have you in existence in other locations, which again does not help things.

So, slaving on in relative obscurity, they tend to deliver piece over piece of solid metal to their fan base. Methinks that the global powers that be smile a bit more on them since they signed on to a record company. But still: I am amazed how some bands still refuse to play the full spectrum of instruments social media offer to them. And yes, I know all of this sucks.

But what can you do when you want fame? Or – then – perhaps they don’t?

And don’t they take their sweet time releasing albums. Starting in the early ’90s, they delivered new material every four years or so. This is pretty lengthy when wanting to keep up interest, oomph, and speed of progression. To illustrate, the remarkable Elegy of Blood got nailed to their cross in 2012, with Bullethead coming out this early May 2016.

The tracks kind of gallop around this metal landscape of theirs. Sometimes a bit too much to my taste. So much so, that the theme gets overused after a while. A tad more variation would have done the album a lot of good quality-wise. But apart from that, the album is pretty solid, nothing much amiss.

Now – somewhat to my surprise – their first track Son of Thunder greets us with an acoustic intro, very soon going very metal on you. With some sort of monologue to kick things off.

You gotta be brave and very sure of your abilities to get going with an 8-minute epic monstrosity. But I like what they did. A great solo, too. Another highlight is Tooth N Nail, very traditional Heavy Metal. But then a little further down the road the Speed Metal heavy Predators races away. One of the rockiest, fastest metal shards thrown at the audience in this album.

But hold on to your seat, your hairpiece, extensions or hat. Whatever you got fixed on you. ‘Cause Bullethead starts to pull out the stops towards the end.

If you can’t wait that long, just go fast-forward and listen to The Fall. Stellar track, but also slightly overcooked. None of the remaining tracks are bad, by the way. All of them are rock solid metal, none fillers so prevalent on records of other bands sometimes.

Now, where does this all lead us? Did Marauder live up to their motto “For us, Metal is Enough!”?

Well, for starters, I reckon Bullethead to be their most mature album to date. Galloping metal, mixed with catchy choruses all about the album, with sometimes insane licks and solos in all that heavy riffing. The aforementioned gruff vocal delivery adds the necessary spice to keep you humming along and do some headbanging as you move along.

For all you Heavy Metal fans out there, this album is definitely for you. And Bullethead is varied enough to please the acolytes of Power Metal too.

This one goes into my metal collection, for sure. Good’un, they rock.