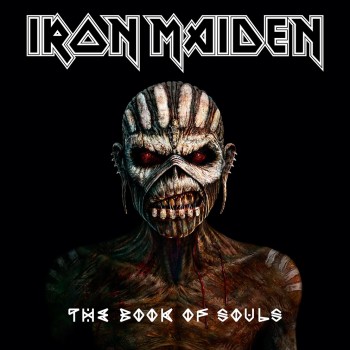 After the ’90s disasters Iron Maiden got themselves into with weak records all along these years, I grew discouraged and dropped them pretty much from my Metal radar. But now – after some investigation into the 2000s records – decided to give it another try.

And I am mighty glad I did.

Undoubtedly, The Book of Souls is Iron Maiden at its finest, but their 16th studio album also comes away with a twist.

The style is definitely slower and a little heavier. Are they getting older? A tad too much beer brewing or airplane flying in the five years since the last record came out? Well, hell’s bells, maybe so, but still this is stellar Metal that real metalheads will crave. And it is a double album too, at 92 minutes of total Iron Maiden bliss also the longest they ever did. And putting the pedal to the metal like this after a distinguished career of some 40 years or so.

The theme of The Book of Souls steals somewhat shamelessly from the old Mayan culture, that was bloody and full of … souls way back in time. Only, as nobody really knew them well (Hernán Cortés and his consorts killed them off really fast…), we only kind of know what really went down back in the Mayan heyday. But nevertheless, a great theme for a Maiden album and a great stage again for Eddie, our old and trusted friend.

The Book of Souls is at times erring into the murky waters AC/DC or Krokus like to navigate in. In some parts, this here trademark Iron Maiden soundstage comes across to you like some fucking AC/DC track on the wrong album.

However, The Book of Souls is still undeniably Iron Maiden.

More straightforward and rockier, sometimes moving into the melodic arena. Now what am I supposed to call this? Melodic Heavy Metal? Gimme a break: ‘Tis just good old Maiden, with a twist.

And they got one, no two epic songs in there one of them being 18 friggin’ minutes in length. And none of them tracks cruise less than 4 minutes along. Again this is one of the hallmarks of a great album. I love it, if bands don’t give a damn of the whacky opinions of consultants and just go for their music.

Even at their advanced age and state of decay, ahem sorry, their refined age of advanced wisdom, Iron Maiden still manage to rock me out of my comfy chair.

And you know what really throws me?

In The Book of Souls Iron Maiden learned to combine the slower parts of their tunes with the hard parts. This kind of started back in the ’90s with some wooden attempts to get there – just check out The X Factor, but now – wow – well refined.

And what about the highlights?

For those who have already read a few of my reviews, I am really not a big fan of intros. Usually a friggin’ waste of your good ear space. But here in If Eternity Should Fall, this is kind of an inverted role kind of thing. I felt like being in a parallel universe. Starting slow, getting more evil with time, really getting into the groove and spitting me out with a vengeance. Well done, band. Holy Shit. OK, at 8.28 minutes, this is not really an intro (even I get that..), but a very good start. And the Voice of Doom at the end telling you about your impending demise is VERY well done.

I hear AC/DC traipsing by my back door demanding entry. OK, they lost it. But not for long. After their short errand in another territory they come back quickly to their own turf. So, Speed of Light is safe in the bosom of Eddie, served with some spicy gusto.

Even if – I cannot resist – you better believe me: If Brian Johnson would have interpreted this in on one of his albums, would you have gotten the difference? Haha, I think not. But still good – love ya, Iron Maiden.

The Red and The Black – ahh! – sublime and rock solid Iron Maiden fare, down to Bruce Dickinson ooh-ing and aah-ing along in their well known fashion. Nothing too sophisticated, but still special enough from the other sinners in the Heavy Metal universe to be different. This is your no-surprise mainstream song. But still good.

The remaining songs leading up to the epic Empire of Clouds are galloping along in best Maiden fashion. The most noteworthy being The Book of Souls – the title track – of again over 10 minutes of length.

The Man of Sorrows leaves me twisted: Not sure about that one – kind of a ballad, hovering at the edge between good and bad. But again redeeming itself with a riff towards the end.

You know, the danger with epically long tracks is that all of a sudden things can go astray. And after a long instrumental intro to Empire of the Clouds, you kind of ask yourself where this is all going. Then Bruce Dickinson kicks in and adds some vocal spice.

Slowly this all builds up some oomph and then keeps going at a slow and somewhat hypnotic pace. I am amazed – Iron Maiden‘s idea of a rock opera! Kind of erring into Prog Metal of the Doom kind. The track is nicely alternating between slow beat and faster passages too – the faster ones happening after about 9 minutes or so. And by the mark 12 this all starts to sound like Iron Maiden again. For a while at least. But as a whole, great track.

The Book of Souls is a real rock solid Iron Maiden album, just the way we like it. And probably one of the best they did so far. Yet still not quite reaching the heights of The Number of the Beast.

Rocky, fast, loads of riffs and interludes – and then again with ballads thrown in along the way. Perhaps a little less aggressive than former albums used to be. It is also a kind of a concept album of a length unknown to date, complete with an epic experimental 18 minute concoction that is frankly amazing.

At the end of the day, The Book of Souls will undoubtedly resound with fans for years to come. And if it was able to retain RockmusicRaider’s attention for the full 92 minutes of metal celebration and wanting more, it’s gotta be good. Right?