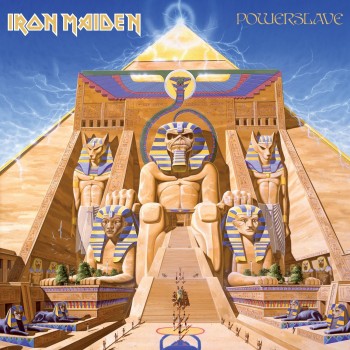 Do you wanna find out how real Heavy Metal sounds like, I mean the genuine, down-to-the-ground, bony Metal beat? Then just go for Iron Maiden‘s Powerslave.

And yes, I know it is old, but who are we kiddin’? This is the real thing, back in the age where we did not have a gazillion of different names and nuances to every friggin’ metal (or not so metal) sound someone wanted to play. And no cell phones, internet of any value, Spotify by far not invented yet. You name it.

However stellar Metal was already on the menu. And consider the somewhat greasy chart environment at that time: Laura Branigan, Cindie Lauper, Yes, Duran Duran, Eurythmics (I think I am growing delirious..). And all of them wanting to kill us with cheesy kindness.

So, what a refreshing gust of wind blew from Leyton in the UK, sent by the crew of Iron Maiden, finally letting her rip something terrible into the midst of all these disco crazed knuckleheads back then.

After the outstanding success of The Number of The Beast in 1982 and the shock of no-return of Piece of Mind in 1983 (kind of a good filler album, but not stellar), we were very vary of what Iron Maiden had in store for us for their newest concoction. After all they for some reason decided to produce one album every 12 months, come storm or high water.

What a mighty relief when their 5th studio album Powerslave came along – featuring such stellar tracks as 2 Minutes to Midnight and Aces High, of which they were going to feed off for a while like crazed vampires in later productions. And both of those made it to single stardom as well.

Powerslave is one of the more authentic or the Maiden albums.

This one really showcases the know-how of the band itself. Of a band really centered in itself and confident of its capabilities. Back then, they were somewhat at the summit of things to achieve for a long time – with popularity on the rise. And it is this type of performance that kept them going.

The friggin’ pyramid on the album cover, complete with Iron Maiden‘s trademark death mask – called Eddie – really puts you in the mood before you even start working on the album itself. This is Massive Addictive, as some more goofy players in the funky pop metal universe would say these days.

When Iron Maiden took Powerslave to the road on their World Slavery Tour, they featured this monster stage set of the Egyptian kind in the background. Complete with Eddie, the Face. Probably the biggest prop they ever created, albeit they tried to reproduce it at a later stage. All of you having had the pleasure to attend a concert back then will for sure remember the stage and the stellar show that went with the music. The tour was by the way the longest ever in their career. It lasted for thundering 331 days and 187 gigs played. Respect!

Powerslave did not hit too hard on the charts in the South of Europe and – surprisingly – in the US too, where it got some sort of a mixed reception. However, kind of ironically and perhaps as a precursor of things to come, it really rocketed up these charts in Scandinavia. These folks seem to have a knack for metal sounds of all kinds. And this has been confirmed like way further down the road in the distant future.

None of the tracks featuring in Powerslave are bad. Perhaps except Losfer Words (Big ‘Orra), the instrumental loser in this album. Following Aces High and 2 Minutes to Midnight, you should most definitely take Flash of the Blade and The Duellist with you.

This whole toxic metal brew also contains an exception of sorts featuring the epic last track Rime of the Ancient Mariner of some 14 minutes in length. Complete with an excerpt in the middle taken from the Coleridge poem. This is MOST unusual in the Heavy Metal genre, but here you go. And very varied too, well executed – I like it.

Yet, you will find that the fan base is split right down the middle on this track. Some think it is a total waste of space, whereas others absolutely love it. But hey, one just can’t to get it right for everyone. A cosmic law, that one.

Now here is something fundamental that really struck me with Powerslave.

Whilst professionally executed by the crew around Bruce Dickingson and Steve Harris, well furnished with riffs and Iron Maiden style tunes, Powerslave also plays it a little safe to my taste. No erring in unknown territory. No pushing the boundaries, and kind of meek in delivery. Much of the same well known soup of sounds all along this whole album. This does not mean it is not Iron Maiden, but it just misses this hundredweight of spice that would make it a stellar record.

So, in conclusion, Powerslave is one of the best and most authentic trademark productions Iron Maiden created so far. I prefer it by far over its predecessor Piece of Mind and it beats for sure some of the follow-on albums that came out later.

However, it will not get near the #666 that so neatly featured stellar metal back in 1982 with no energy to spare. But would I call it the best ever Heavy Metal album of all times as some of my co-reviewers have attempted to do? Nope, sorry guys. Does not cut it by far. However – as an Iron Maiden fan – Powerslave is something you should most definitely own.