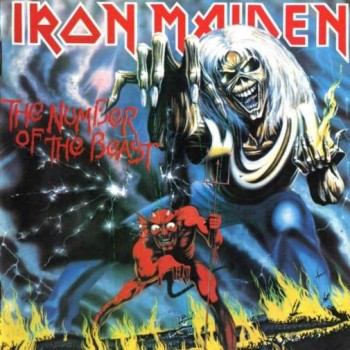 Some two years after AC/DC’s attempt to fame with Back in Black, came along a newly empowered – or should I say emboldened – Iron Maiden with their own stellar album The Number of the Beast.

Success was far from certain at that time – the band just got rid of their vocalist Paul Di’Anno and replaced him with Bruce Dickinson. Then they adapted the song writing style to the vocal powers of the new lead singer. As it turned out, this was actually the major kick-off that launched this band on a course to fame that still continues to this day.

Of course, once you started listening to the friggin’ vinyl (nothing else existed back then, believe it or not..) with the lead track Invaders you went “Okay, not so bad, but where is the real spice?”. But then suddenly the sound changed big time towards the middle and started to rock you across the room.

“Woe to you oh Earth and Sea, For the Devil sends the Beast with wrath, because he knows the time is short. Let him who hath understanding reckon the Number of the Beast; for it is a human number. It’s number is 666.” Well, who in his or her straight metal mind has not heard that one and absorbed it about a thousand times? Used and abused all over again over time, the title track The Number of the Beast is actually one of the most classic and best ever written tracks, poured in rock solid Heavy Metal. Of course then followed immediately by Run to the Hills, which is equally catchy. Two hammer blows that made this album what it is today.

Okay, I admit: Tracks like Children of the Damned or The Prisoner (the one with the cool opening dialogue that sounds so very true), even Hallowed be Thy Name are erring on the side of very good, but – alas – not yet stellar. But they got friggin’ riffs in there that are just out there in space. Still today after having listened to this record for a gazillion of times, they still get to me. And never mind the discussion if or if not Total Eclipse should have been part of the original album (in vinyl), the original selection was dead on track. The song actually was added to the remastered CD version that I am currently listening to – not providing any additional quality whatsoever.

There are more anecdotal passages related to the creation of this album. Stories about hauntings in the studio, bizarre accidents when band members drove nuns about the countryside. The infamous invoice being £666 (ok, come on, this is laying it on somewhat thick..). But hey, if true – great, if not so true, well – a hell of an invention and in any case very good for marketing.

Actually so good that some religious groups in the US – where else? – took the band to be Satanists, trying to ban their recordings to hell. Little did they know back then that today’s Black Metal scene contains some most notorious psychopaths – and I mean this the way I say it. And again, today this seems to be accepted – never mind rape, beatings, drinking blood and so on. Go figure!

Of course Iron Maiden did its very best to paint that hellish picture, just look at the album art that I loved back then and still love to this day. Even if the band tried somewhat meekly to defend themselves later that the lyrics tell another story. All right – they do have a point; the lyrics speak indeed another language.

Iron Maiden’s album The Number of the Beast is a classic. If you do not have it, get it. And considering that the band created this release in a hurry with little material to show for at the beginning, this is a major feat. As long as there are metal fans around, they will – for sure – worship this album as one of the best ever Heavy Metal albums made to date. Notwithstanding the endless talk that Seventh Son of a Seventh Son is actually the better album. Because it is not. The beast rules supreme. Absolutely.

And the record found its way onto the RockmusicRaider Old’n’Tasty series as well. Congratulations.

Yes, this still rocks big time. I sometimes go back to it when in need of some real metal. Ways to go, Iron Maiden.