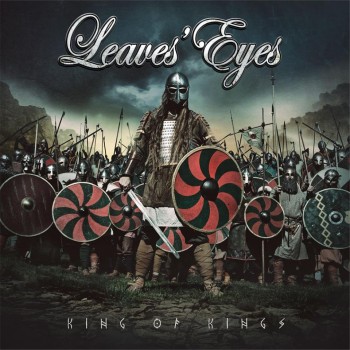 I am pleasantly surprised! Leaves’ Eyes again managed to up the ante and add a lot of metal in King of Kings to their already improved former delivery in Symphonies of the Night. They steadily increased the quality of their musical prowess over the years and King of Kings is no exception. Deeper, darker, more metallic in structure, but also folk laden in certain parts. Sometimes it almost reminds me of some Folk Metal acts – but not quite to the extent of calling them that. And the lyrics delivered by Liv Kristine Espenaes are up a notch too – much more mature, very precise and varied. And – how to call it – more meaty too; really well done.

The story is based on old (or the first) Norse Kings – specifically Halvdan The Black, who – whilst winning a lot of battles – died by drowning after having broken through thin ice into a lake. His main achievement – apart from uniting some of the existing fiefdoms – is fathering Harald Fairhair, who grew up to become the first united King of the Norse tribes. And this is at the center of the story in King of Kings.

Of course, I am biased being a big fan of this era way back in time, when vikings were still vikings. Whilst seemingly not a lot is known from that time, there are stories galore in Europe and surely on the British islands that the Norse terrorists liked to ravage. So, right up my alley! When someone offers such a kingly story to me, I am all gung-ho.

Now this is real Symphonic Metal hitting your ears – in the first half of the album at least. Sometimes almost going too much to where Nightwish was before. So, the tune is essentially not bad, but the wear and tear of the genre starts to show. The trademark Leaves’ Eyes sound has nevertheless gotten a bloody good polish and matured to a great degree. You will still get the old trademark sound, but it has gotten rockier and – I daresay – much more metal in sound and deed. But then for the second half we are getting into Folk Metal too. No kidding, and I love it. Do I hear Eluveitie traipsing around in the background? ‘Tis complete with stuff in native language.

And they dunnit again: King of Kings (the title song) features one of the best ‘Beauty and the Beast’ impersonations I have heard so far. But then again, this is basically an invention of Liv Kristine back in time – so no doubt it is good (but now it is better..). Another improvement of last are the growls: Still not stellar, but much better than before. And Leaves’ Eyes seem to have learned from one of the more famous Black Metal outfits.

So, King of Kings is all improvements, right? A straight 10-star rating?

Well, not so fast. ‘Cause – hell’s bells – the Commercial Beast is rearing its ugly head in some of the tracks and I hate this with a capital H: The Waking Eye is one of them. The one with the video, and why am I not surprised.

Tuning the song structure to please the vile mainstream in order to maximize sales is understandable. But here it just makes me look for the next window to jump out! This is what brought the mighty SAVN to their knees and has sent others down this very same rabbit hole. And I get it, you cannot earn enough to eat by only going full tilt progressive to the edge of the abyss. But these guys have a reputation to defend. And this is somewhat of a ‘fil rouge’ throughout this record. Another negative point is the somewhat bland solos, missing some peppercorn crust and fiery sauce. And few and far between they are too – so I am not very amused.

And what about the tracks?

You know, most of them are good. For starters, the intro Sweven is very well done, first atmospheric, then more meaty, leading into the title song King of Kings. Halvdan the Black is worth mentioning due to its real metal moments, I like it. Speaking about improved Symphonic Metal: Go ahead and listen to Edge of Steel that has gotten some red-haired assistance by Simone Simons (Epica). Same goes for Blazing Waters, first leading us astray in the atmospheric, airy-fairy arena, but then – BANG – going full tilt folk metal. Hehe! I like that.

Sacred Venom – hmm – I am torn. It is actually not bad, but almost too catchy to be good. So, now what? Well for the moment we will accept it as a catchy drinking song of sorts. Standing on the trap door to doom that did not open yet. Or are Leaves’ Eyes erring onto the path that Alestorm is already on?

Now to the last song Sword in Stone. Who wrote this? Nightwish right? OK, just kidding, but Liv Kristine, Alexander Krull and Thorsten Bauer are erring terribly far onto the latter’s territory. The track itself is nothing to write home about, but its closeness to Nightwish is just startling. Down to the distorted guitar play people like to hit me with to impress.

King of Kings is Leaves’ Eyes best so far! And following the road of steadily improved quality from past to present. Good metal with a real sharp edge, mixed with perfectly delivered vocals. All of this complemented with folk elements going full Folk Metal in places – and in others moving into Heavy Metal, no kidding. So in short, very varied and diverse, well produced and never boring. But at the same time never losing the sound Leaves’ Eyes has been famous for. No easy feat.

Good job, I like it. And let’s pray to the gods of metal that this improvement curve continues to show in Leaves’ Eyes’ next album.