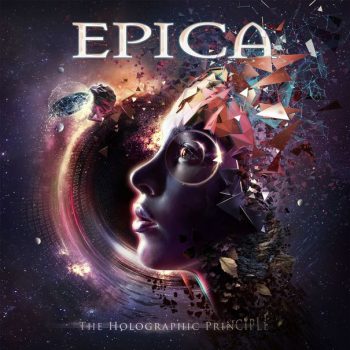 Epica are known for their penchant towards super-epic, somewhat overstuffed and choir-heavy productions. Starting as a Symphonic and Gothic Metal outfit with the astonishing The Phantom Agony, the band slowly evolved towards an orchestral laden, bombastic style that left many of their earlier fans confused in their wake.

Over the last years we have seen many of the major players in this genre move into a similar – if not the same – direction. Which means that what should be innovation turns out to be the new mainstream of sorts. It is a little like this drive to political correctness, where nobody likes to step outside the boundaries of the comfort zone. But to get progress, you need to do exactly that.

I have also been less than enthused with The Quantum Enigma of 2014. The record hit you with a highly compressed and more than overdone slice of symphonic something. With way too many elements added to the fray. And this was a pity, as the overall song writing was actually pretty good and there are a few very good tracks on this record. So, it is with some apprehension that the RockmusicRaider crew awaited this newest offering.

A rock solid theme – a plus in Epica’s albums!

The band’s longstanding modus operandi to provide a solid theme to the music they create is one of their strengths. It gives their albums purpose, meaning and drive, which cannot be said from many other players out there.

By tradition they go for themes ranging from religion, over history to science. Often there are sub-themes that reach across several records. The Holographic Principle is no different. The theme tells the tale of a digital hologram where – and I quote ‘…nothing is what it seems’.

This led some members of their fan base to climb the crooked, steep hills to the dreaded philosopher’s base camp of geekdom nirvana. Loosing themselves in some sort of high-strung debate on what reality we should be looking at and whatnot. This instead of going for the quality of the music delivered.

The band is – by the way – not alone in this very specific, scientifically laden sub-genre. Just check out Arien Lucassen’s Ayreon and his machinations. Now Lucassen’s creations are usually not of the Symphonic Metal kind, but lean more towards the Progressive universe. Another prominent example is Nightwish, who took an evolutionary approach in Endless Forms Most Beautiful.

So, what will The Holographic Principle deliver to us?

Right off the bat, the band’s new 7th full length album does not come across as dramatically different from its predecessor. But then some distinct, yet subtle changes in their tune slowly emerge. First, the sound is crisper, more refined, mastered to a point, so that elements are present when they need to be.

I liked the inclusion of some Progressive Metal into their tune, adding a bit more spice than in the previous edition. It is nothing really revolutionary, but it gets noticed nonetheless. Also, they started to turn down the sound when preparing for growls. This adds some much needed crunch and I like that. So, overall a much more refreshing sound comes my way when listening to this album.

And then there is the talented Simone Simons, who – for this record – nicely modulates her voice to give some of the tracks a different flavor than others. In the first half, some of that sounds dangerously like a strange mix of Liv Kristine (ex Leaves’ Eyes) on steroids and Elize Ryd (Amaranthe). Whereas in the second half the Tarja-esque note of the tune will certainly not escape you.

But I appreciate the change. It definitely speaks towards her talents and the way she evolved over time. Universal Death Squad and The Phantasmic Parade contain a few prime examples of Simone’s new vocal powers for the Liv/Elize mix. The Tarja Turunen clone can be observed well in Ascension: Dream State Armageddon.

The Holographic Principle – however – sails somewhat dangerously close to their brethren’s realms in the genre, notably Delain, Nightwish and Degrees of Truth. Or vice-versa, depending on how you look at it. Now this is something we observed already in Design Your Universe and it now popped up strongly again. Only to add a whiff of Evanescence this time at some points of this potpourri of elements, sounds and flavors.

In addition, the record comes across as very choir heavy, making it sound like some offshoot of the soundtrack of The Omen at certain moments. I would also have preferred the guitars to take more center stage. Admitted: The guitars seem to be more present than on the Quantum Enigma. But as this is called metal still, a more aggressive and prevalent infusion of stellar guitar work would be in order. To the very welcome detriment of the ubiquitous choral presence.

The growls are and have been an integral part of the Epica soundscape. I would thus have liked a more prominent place in this record for them too. But – as the band stated – the lead, meaning Simone – takes center stage, whereas the growls are by far second. Also, the compression in this record sometimes risks to get the better of the tune. They just about sails on the good side of the line, always in danger to trespass into the land where no rules exist.

What stands out on The Holographic Principle?

Well, not the intro Eidola for sure. Whilst bearable, it is way too long. Want to go for some oomph, try out Universal Death Squad for starters. Choir, Simone, growls, guitars – all there. The track sports a pretty complex sound structure too, with changes of tempi galore and one of the rare solos in there, albeit short.

Divide and Conquer will bring the much needed crunch to the party. If you like some sort of Pirate of the Caribbean sound track à la Epica, then Dancing in a Hurricane is your song. A little oriental, but not overwhelmingly so, the track is a tad softer than the other heavyweights.

Now here comes the question: Are epic closing tracks worth the effort? I admit, I have a hate/love relationship with The Holographic Principle: A Profound Understanding of Reality. Technically outstanding, complex songwriting, but going nowhere? Well, you be the judge.

Now a word on the acoustic tracks for those listening to the De Luxe edition!

The five tracks are really testament to the talent prevalent in this band. I said it already in the past and will say it again: Epica should produce an unplugged, acoustic album. The quality of these tracks is outstanding. Feels like a soothing Bandaid after almost an hour and a quarter of relentless pounding on the main record.

The Holographic Principle is still heftily bombastic and heavily epic. This makes for equally heavy listening, sometimes almost reaching sensory overload when going for the entire record at once. Would less have been more? Perhaps. But then, there are no fillers in this record, all is in its place. So, we have got to live with the fallout, like it or not.

The refinements the band built into the album over last really make this one shine much better. Let’s be clear: Epica did not go the extra mile and created something new. Instead, they built enough variation into their existing tune to outshine their former album. And – more importantly – get ahead (again) of their partners in crime. The crisper sound, the detailed presentation of the growls and new progressive elements make the difference on what we were accustomed to in the past.

It really appears that the band did not want to change a winning team too much (as the saying goes). Nonetheless, The Holographic Principle is still by far a better record than its predecessor and will continue to lead the pack in the genre. It however remains to be seen if in the future this subdued approach will be enough to keep their place in the spotlight.

Ed’s note: If you liked this record, you may like to try Revenience and their Daedalum.