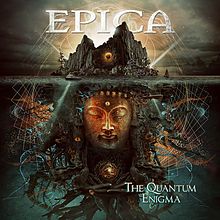 What a change since The Phantom Agony and the likes. Some ten years have passed and a few follow-on records, too. But this kind of change is still rough.

And – oops – gonna make friends again! Or perhaps not with all these august fans in action to protect and serve. And even the Revolver Mag giving The Quantum Enigma very high notes.

Well, I am torn on this album. And it is indeed a mixed bag that you get from the Dutch Symphonic Metal band Epica. No doubt about it.

For sure the production kinda rocks. But – gosh – the mighty masterer added just a tad too much bombast into this brew. Epica tried to keep the operatic piece somewhat controlled, and that is good. However, they pushed the beauty and the beast button a few times to many. As in The Essence of Silence.

And this just makes my teeth grind.

Also, the use of the choir and strings border on the insane in certain passages. And Epica try to create an orchestra of sorts themselves, by pushing too many instruments into the fray. Like overdone turkey, with too much stuffing in such a way that gravy cannot save it anymore.

OK, I am ranting again.

After all, the record is technically quite good. Or only kind of good. A bit like the terrible ogre hiding in his swamp. Shrek where art thou? This tune also does take time to digest, and only after much (very much) time to get used to the 6th studio album The Quantum Enigma from Epica all of this starts to stop being an enigma and grow on ye.

Epica worked a lot on the output it seems. With the involvement of all band members, trying out new methods to record it. And to me The Quantum Enigma almost sounds like democracy in music. Because they left so many elements in their tune that all this goodness almost overwhelms today’s abilities to record and reproduce such complex pieces of work. But for sure those are very good musicians plying their trade.

By and large, the tracks are varied and – very importantly – also different from one another. Okay, I get it: Their style precedes them and this is similar to former productions. But with an edge, I would say.

And forever grateful I will be that they did not attempt to be a friggin’ opera, whereas it sometimes gets close. Almost too close. But never as bad as the crimes committed by Diabulus in Musica in Argia.

Ironically, their acoustic versions of songs in the deluxe album that I am listening to sound much better. Of course pure Folk, not an inch of metal in it. So, in a sense they would have been better off producing an acoustic album.

I am truly impressed with their unplugged interpretations. This slowly moves towards the sublime, no kidding.

Albeit a lot of plugged still remains in this unplugged piece of work. I am just now listening to the acoustic versions of theirs songs. Damn! They missed a full and promising career, it seems. 10 out of 10 I would rate them – pretty good shit, soulful and well thought through.

No doubt the band would argue that the acoustic pieces are just a manifestation of their core know-how and what have you. Which are the operatic, bombastic, symphonic activities they like to indulge in.

But if you compare tracks like Natural Corruption with the plugged version? Well, more stellar than anything else on this record you won’t get. The acoustic piece in their production is really very fucking good. And I am amazed!

OK, back up to the stuff they like to play in the main album.

The structure of The Quantum Enigma executes very well. There is a very good flow in all of the elements. I really like that aspect. Yet, one of the main shortcomings of this album is that the band seems to be desperately trying to be true to their trademark and style. Instead of concentrating on their music and let the music talk and flow by itself (I am getting mystic…). This is what gives this album this kind of artificial, over-stuffed taste and feel that people have so much difficulty to pin down.

Very much in line with what I just said above, the album itself did not do all that well in the charts, given the (perceived) status of a leader of the scene. Getting to a reasonable level in the Dutch charts (rank 4), the rest of them is not all that stellar. And I am really not surprised, judging by what I hear.

Skipping the terrible intro, The Quantum Enigma starts pretty well with The Second Stone, sounding a little like Delain with an edge. But again, too much of the choir in it.

The third and fourth tracks Essence of Silence and Victims of Contingency just caught too much of Beauty and the Beast in them. In a beastly way, I might add. And this mix of choir, clear vocals and growls is like – too much of everything.

The slower tracks like Canvas of Life are more full blooded and thoughtful than the others. And for once not too over-delivered, with a gazillion of different instruments and elements in them.

And once you think the album is drawing to a close, they hit you with The Quantum Enigma: Kingdom of Heaven, Pt. 2. An (almost) 12 minute epic, delivered with a sledgehammer. The full monty! Not all bad, but – gosh – like a sack of stones at times!

The second disc with the acoustic, non-metal pieces is – as mentioned before – very good indeed. Nothing to say there. This actually is folk of a symphonic kind right there. And already loaded with enough details to suit an entire band. They seem to have missed out on a different career. I really like the unplugged tracks a lot.

Overall, The Quantum Enigma is not a bad album. But way too heavily laden with too many elements stuck in there, because they can. And this thing to stubbornly stick to an already well known style does not really add quality neither.

Even if you could argue they kicked it up a notch. If only they could have let go much more, and let the music flow and talk by itself. THIS would have been stellar.