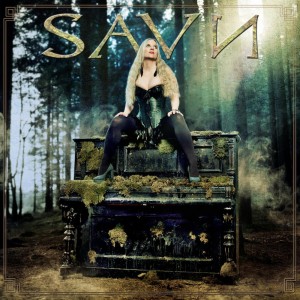 Here comes SAVN, who was lauded as the breath of fresh air into an already dead (or kind of dead) genre that too many bands tried to ride into oblivion.

Well, hell’s bells, not quite. The genre is far from dead, with lots of good stuff coming out of it still.

So, what is this Norwegian act Savn? And more specifically, what is their debut album Savn all about? Judging by the creative process to get to a name of the record, not much.

The band consists of two former members of The Sins of Thy Beloved and the former lead singer of Midnattsol, Carmen Elise Espenaes. The sister of Liv Kristine (Leaves’ Eyes). So this gang should actually be powerful, with seasoned professionals at work. And only good metal will emerge from them.

Actually the music is not all bad indeed and it holds some kind of good promise. But I daresay SAVN really did not push things as far as they should have. Some good beginnings, true. Kind of a debut of sorts, but for sure nothing that would herald a new era of Symphonic Metal.

The tunes are (kind of) good, but nothing spicy enough to amaze. In other words, you’ll find a lot of love and hate close together. And I have been listening to this blurb up and down, back and forth – holy cow. I just fail to be really excited, when I do like spice and surprise in my music.

And the mixers and masterers compressed the album almost to death. To a point that Carmen Elise Espenaes‘ voice almost drowns in the rest of this gaggle of instruments, rounded bodice and all. Indeed, the instruments themselves – especially the acoustic ones – do not come out well, neither. All of that ending up in some sort of primordial soup of terrors.

All of that is not very well mixed and produced. From a reputable recording studio. I am disappointed – they should know their trade. And it depends on what device you listen to the album. More (or very) high-end devices tend to produce a somewhat, kind of better output. But – gawd – if you go down the quality food chain of your equipment, then the sound just sucks.

And where, oh you lauded musicians, are the stellar guitar solos that rocket us measly listeners and fans the fuck out our comfy chairs into the space of your music halls?

Those have gone missing, like bears during honey harvest time. And then Savn present us with – what do they call it – growls. But its all weak tea, very much along the lines of other Symphonic Metal outfits that just did not cut it on that front.

And now, to top it, I just learned – somewhat to my unending dismay – that they have been nominated on Terra Relicta – Dark Music Awards for their track Hang On. Due date this end of January 2015. Dafuq, folks.

On the other hand, Musical Silence and – trumpets blaring – Hang On would get on the preferred list of this album. The latter one has one of the better passages in it. So I guess this is why it got its nomination.

Plus add I am Free, which is actually the best track in this here land of sorrows. But as I said, nothing that I would even send to my grandmother and call it metal. And you cannot send her the grimy and scary stuff anyway, for sake of her sanity.

The Demons in Me sounds like some non-electronic, but poppy version of Blutengel of sorts. Down to the weird accent for the English used. And frankly – some of that reminds me of times past. Like later productions of Mike Oldfield, when he came out of his single musician psycho-stupor and started to do some music. All I Want would be a good example for that.

But I do like Lengselens Hånd in a kind of geeky way. It does have a fairy quality to it, believe it or not. AND Espenaes’ voice and reach finally comes out on this track much better. Also, the production of this here track is actually the best of all. Of course, not a trace of metal. Well, okay, a little bit towards the end.

SAVN covers mostly some bland production of a music type you would like forget as fast as it appeared! Too much synthie pop at a level so low that even Amaranthe would not attempt to get to. No surprises, no spice and a bunch of definitely talented musicians not delivering to the best of their abilities and qualities.

But a lot of the blame goes to whoever mixed and produced this questionable piece. I just do not get it! This could have been so very good. But isn’t for some reason.

Well, let’s hope SAVN will wake up for good for their follow-on album. And deliver a much more tuned-up and thoughtful production for their next brainchild. I have not yet given up hope that they will improve, but just about.

All the signs for improvement are there! So, please, please me – as The Beatles said so many years back. I can feel your energy, but: It.Just.Don’t.Come.OUT!!