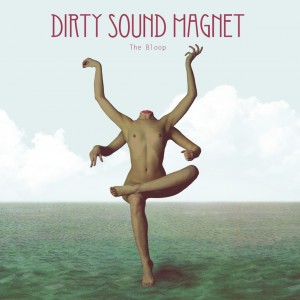 Gotta love them! The Bloop sounds like stuff we already heard really and felt somewhere, but when? Ah, back in the ’70s – evidently. In yonder times when laid back and cool Rock was in fashion. Southern Bluesy Tunes that really relax you – good for the soul after all that complicated Metal stuff that I recently listened to.

Like getting yourself a bucket of shrimp down at the beach near New Orleans. And then chillin’ out some later with a cold beer in a beach chair getting your jelly-belly burned. Or just hanging out after a tough day at work. Bubba Gump anyone?

Flavors of Jimy Hendrix here, some essence of Led Zeppelin there, sprinkled with some Pink Floyd. And sometimes the tune almost sounds like Cockney Rebel and  Strawbs combined. This is how one could best describe the experimental blurb The Bloop made by Dirty Sound Magnet back in 2014. And it is hardly more than 20 minutes or so, very short, but strikingly good.

This music is really like a time machine taking you back to past musical joys. And they do this well. Not many bands nowadays still master that straight, somewhat subdued style that was in fashion so long ago and still has its followers – whereas quite a few try to get there. And not many of them deliver their songs with such passion that you just gotta listen and not stop until it is finished.

If you like this kind of music, haul your behind out of that door and go see them on stage. This is where they are still a totally different matter, full of energy and juice. Delivering their tune in a very sophisticated and professional manner. I can only recommend it.

The selection of tracks on The Bloop is a mixed bag. Ranging from straight Rock songs like Chocolate Woman (I want to meet her, this chocolaty woman..) and laid back, bluesy pieces like 21 Century Witch. Southern Comfort in musical notes, I just love that one.

To my surprise the longest track is an instrumental called Sunday Drama. Maybe pushing it a bit in the dramatic department of old time rock psycho-solo down-the-river instrumental tantrums, but still very good in that old-fashioned way they produce and deliver stuff.

The last two tracks Move and Strike Me (Hate Yourself) are good, down-to-earth rock songs, fun to listen to and enjoy.

Dirty Sound Magnet – the band around Didier Coenegracht – has again delivered a very good and rock solid (no pun intended) set of tracks to enjoy. And this after an already pretty cool What Lies Behind. Albeit all of that is a bit short as an album goes, but then we have not given up hope that they will come out with a full length record in a foreseeable future.

The music is delivered in their excellent trademark bluesy rock style, perhaps pushing the psychedelic piece a bit too much this time. And it is in this very special style where the allure of their tune resides. They have taken from the styles developed way back in the last century, mixed well, added some spice and created something really cool. Their own brand. I have high hopes for this act and hope that they will deliver more soon. I’ll be watching!