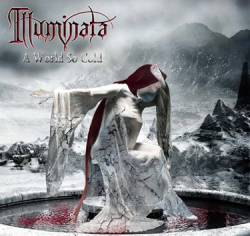 I have no idea where all these mediocre reviews come from I tortured myself reading. And why the fuck I did this to myself is beyond me. The 2011 album A World So Cold from the Austrian band Illuminata is simply refreshing. Perhaps apart from the bodged intro that just wants to make you scream and kick the walls, that is.

Pure Symphonic Metal of the Gothic kind, best described as Within Temptation with an edge, mixed with some Xandria style elements. Add a hint of Nightwish to this medley and it will put a smile on your face. With just enough bombast to avoid disturbing my metal feelings too much. And not to annoy the hell out of me like Diabulus in Musica managed with their last record, when they tried to be an opera of sorts. Which they are not.

So, yes, I get it, my purist friends! They do follow the overall genre and have not yet quite found their own style. But so what, folks? Give them some more time and they will come along. From dire beginnings, judging by their former work, they have come a hell of a long way in quite a short time. And in truth, there is homemade spice in the pottage that they present. So, we do see first beginnings of good original sound emerging.

And I like surprises in my tune, like the fact that this is actually a double female-fronted band, something which you seldom see. Girls do not get along too well together usually. Actually, the band sported total gender balance back then – three girls and three boys. Whereas the latter do the heavy strumming and drumming and the former do the singing and keyboards. You only hear the boys shortly yelling some stuff in one of the songs, but that’s it. Girl power in that one. So very cliché, that!

At first, I was very afraid when starting to listen to A World So Cold, hitting the intro (and I just HATE intros). And this one is especially bad – a waste of space. Not sure what Illuminata were thinking. But then the second track Cold Hands Warm Hearts takes off. And here we go into full redemption. I just love it – all registers fire at once. Nicely symphonic and enough metal to please in this creation, so that we do not forget what style this really is.

End My Agony is of a similar vein, but different and more varied still. You will find surprising style changes in this one, sometimes soft, sometimes rocky, just the way it should be. Superb – you just gotta love that one.

As always, the rock ballads from metal bands are the best. Silent Poet is the proof of the pudding. But then it is not too much of a ballad – mid-song it gains some tempo and gets going pretty good. Smart duet, too. The World Collector points in the same direction, starting slow, then taking on momentum, I like it.

The Divine Puppet is noteworthy, nothing more, and for sure not as good as its predecessors. But what really got my attention later in the album are A Frame of Beauty and Endless. And only after listening to them a few times. Once they sink in they get to you. Pretty good these two. The remaining tracks are good in a somewhat geeky way – not perfect, but certainly not bad neither.

All of that jazz is delivered in a somewhat lavish fashion. With none of the tracks at less than four minutes in length. Except for the intro, but this one we better forget about. In essence, they did not give in to the temptation to limit the length of their tracks to around 3 minutes. And this appears to be the attention span of the average listener. To go way beyond that is courageous and I love them for it.

A World So Cold is great Symphonic Metal – with a lot of Gothic Metal woven into the fabric. Varied, surprising, delivered in a fresh style with a lot of spirit. And a lot of thought went into each song, just look at the lyrics. I love how they used the two female singers to get a more original sound out of their tune than many other bands of the genre can manage.

There is of course still a lot of potential for improvement for this gang. But this only gives me hope for the next album that is rumored to come out sometime in 2015.

I will most definitely go ahead and get myself a copy.