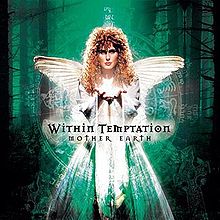 Kind of changing direction, but still following the vein of its predecessor Enter, the Y2K 2nd full studio album Mother Earth of the Dutch band Within Temptation is an astonishing piece of work.

Perhaps a bit too much in a hazy, tree-hugger kind of style, but still very varied. And with a few extremely good tracks in them. They called their new style ‘Celtic’ whatever in hell this might mean. And very importantly, they got rid of the Death Grunts that really were never very good with them.

And in truth, this album probably provided the band with their real starting point for their stellar career in later years. What shines most in Mother Earth are the slower tracks, expertly executed by the band. And of course all equally expertly interpreted by the female vocalist Sharon den Adel, giving the whole album the heart and soul it deserves. I am impressed at her reach and how she can vary her performance to fit the song, like she does on Caged.

The tracks are all very well varied. Sometimes rocky, then again airy and fairy, just the way we like it from Within Temptation. I am however somewhat loath giving them a Metal label, it just does not fit. Sits somewhere astride between rock and metal, difficult to ascertain where exactly.

Mother Earth is probably one of the best – if not the best – of the creations they produced so far. And I am reviewing this in 2014. Within Temptation already produced much lauded records like The Unforgiving or Hydra. And I am just not too fond of both.

On the downside there is a trifle too much bombast on Mother Earth. But in the end it is still bearable, even to my metal injured ears. Yet again, some of that stuff sounds like a musical of sorts, which is a pity.

But then, it fits perfectly. Also, there are total failures like the the dreaded Intro. WTF, I just hate intros! Or Dark Wings that sounds like some terrible regurgitation of Barclay James Harvest in style and Kate Bush in interpretation (sorry Kate, I still love you..).

But so far so good!

Mother Earth – the title track – is a delight to listen to, though. And so are Our Farewell and Never-Ending Story. Perfect arrangement and superb execution in my book. Deceiver of Fools comes complete with an astounding duet at the beginning, absolutely lovely.

For some reason Restless, the first track in the former album Enter, found its way into this production again. Nothing speaks against it, this is indeed a superb piece of work anyway.

Then of course – last, but not least – there also is Bittersweet. To which I grew kind of addicted to for a while. A really cool slow motion song. And I thought that they don’t make ’em like that anymore. I was so very wrong.

Noteworthy, too, is In Perfect Harmony, some sort of soft ballad that reminds you of some lead track for a … Disney feel-good movie. Not bad, but not really contributing to my idea of an evening of Metal Mojito. I kind of keep grinding my teeth at that one, too sweet for my taste.

I really like Mother Earth and return to it quite often to listen to some of its tracks. An extremely pleasing progress from their first album and – to my relief – without their terrible death grunts.