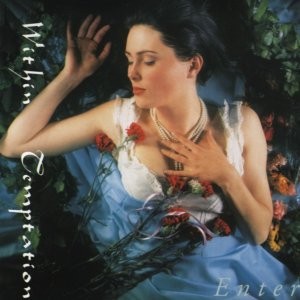 As I am in the Within Temptation groove, let’s stay there for a while. It would be a pity not to review the very first record Enter. They created this one back in 1997. After the band officially assembled about a year earlier.

The band formed just after the departure of Sharon den Adel from her usual work routine as a fashion designer, I kid you not. Smart girl, that. She apparently still designs her own outfits. I wish I could do that as well. But – alas – I can’t. I can write loads of annoying words about music I find and send them around the world, though. So, here goes.

Within Temptation took off directly to a stellar career with this decidedly very high quality production. I am awed, I must say. To hit it off that well with the debut full length is a feat not many bands manage. I was (and still am) listening to this record up and down and up again. And, holy cow, this is good shit straight from the very beginning.

A little ephemeral, ethereal and almost supernatural in sound, but at its base quite Gothic Metal in style. And I just love it. At this point in time, the style is still very instrumental and their symphonic/bombastic way of doing music only emerged much later. Just look at Hydra and its trappings.

And Enter still sports their original setting with Martijn Westerholt at the keyboards. Westerholt – at a later stage – defected (or ‘was defected’ – not sure which one is true) the band for ‘health reasons’ and founded Delain with great success. And it shows, the keyboard performance is just outstanding, not what we know about in later years.

The death grunts are – as usual with Within Temptation – not very good and they abandoned them in later productions, much to their credit. However, on this album this kind of works. Not in a Death Metal sense, but in a – what was it called? – Beauty and the Beast context. A little bit like Shrek and the Princess. Only, at that time no-one even dreamed of Shrek yet.

Well, hell’s bells, already the first track Restless blew me away. The stellar keyboard intro just gives me the shivers. This is cool stuff straight from the start.

Enter plays the Shrek theme very well. I like Sharon’s contribution, but it is still a bit search and destroy at this time. Things became much more mature in later productions, starting with their follow-on album Mother Earth. The dreamy Pearls of Light follows straight on the heels of Enter. One of my favorites, no doubt about it. This theme is followed through to the end, culminating with Candles, which is just amazing to say the least.

All-in-all, Enter is a great debut album. Who would have thought that they take off with such a strong set of tracks. The record gorges with stellar guitar work and great song-writing. And – last, but not least – a superb contribution from Sharon den Adel. And this even if Within Temptation exploited the tree-hugger kind of theme a trifle too much. A tendency we saw further enhanced in the follow-up record Mother Earth.

But, you know, whatever. This is still good work! I can still listen to this record endlessly, but I need to be in the mood for it.