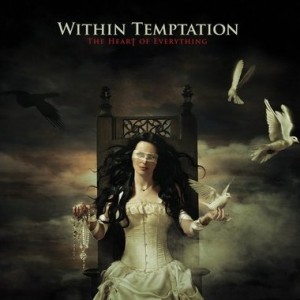 The Heart of Everything is the first Within Temptation record I ever listened to, and it hooked me right away. The slightly subdued symphonic Gothic Metal sound and the diversity of the tracks immediately got my full attention. Very dark, brooding sections changing with light and airy stuff coming right out of some sphere, you name it. Sometimes this sounds like some computer game soundtrack of sorts. Like in somewhat overdone, if you get my drift.

The Dutch band Within Temptation (I could not believe they were from the lowlands at that time..) created a worthy successor to
The Silent Force, which in itself is superb. I would however not necessarily call it better, but different enough to be very good as a standalone.
Their tune is beautifully executed, though. Within Temptation try to push the symphonic/bombastic out of the way and let instrumentals deal in the foreground.
Well done folks!
Of course, Sharon Den Adel – as usual – keeps the tracks alive and flowing. Some of my co-reviewers opined that there are too many clean vocals for the male singers. So, some forgot that this is not a hard core metal band. Well, guys, half-hearted growls don’t serve no purpose, so better out the door with them.
Or move in with the metal folks, which this band here is not geared up to do. And it would be a pity to be honest. The Howling takes you right along this heavy road of things. Pretty good that one. It feels like riding along some deep dark and haunted countryside followed by demons ready to kill.
I do not care much for the second track What Have You Done with Keith Caputo. This is not a quality add-on in my book. What the hell were they thinking with this one! This thing to use guest singers in the hope that this might improve their quality some will become much more rampant in future releases, like in the 2014 record Hydra.
But then The Heart of Everything takes off with some gusto, boasting some superb and astonishing tracks. Like Frozen, The Heart of Everything – the title song. Or then again Our Solemn Hour stealing some of Churchills speeches and the excellent Hand of Sorrow. You name it.
To top it, all of this is very diverse. Within Temptation managed to marry their Gothic urges with superbly executed Symphonic Metal. And keep the ugly pop at bay, which is good. And that is remarkable, knowing that nothing is ever easy in music creation.
Unfortunately the record loses a bit of steam in the last third – with a very welcome ray of light in All I Need. Also, their tracks sound somewhat over-engineered at times. Too perfectly executed, no rough edges. Plus, all of this seems a little too poppy perhaps? This is why it earned an additional label for Pop Metal as well.
Apart from that I absolutely love it. The Heart of Everything really represents Within Temptation at its best. Later records like The Unforgiving and the aforementioned Hydra embarked on the slippery slope of the vile mainstream a tad too much. And lost a lot of the former qualities in the process. Let’s hope that the band finds their way back to this kind of light and airy way to make music.
Should you have that record in your collection? Absolutely, and there will be no regrets. I’d buy this record again anytime.
*****