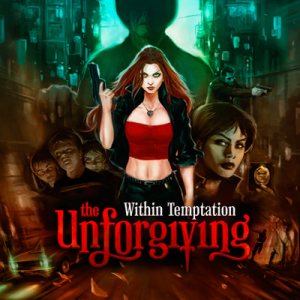 OK, I get it! Nothing is ever easy and change is a constant, as there is no such thing as a steady state in physical music creation. And it needs some courage to do the change-over that these guys have done. Like in radical and absolute. Nothing much left of Metal and Gothic or Symphonic, whilst there are some attempts to get back on track.

The 2011 album The Unforgiving from Within Temptation is a totally new direction from what was before. Some of my co-reviewers compared the record to Nightwish, but there is no Nightwish ingenuity in there, folks.

To me it sounds like a mix between Delain and Fleetwood Mac. And sometimes it seems they drifted over to the Robbie Williams style of good old mainstream dullness for some of that. Perhaps less the chest hair effect.

The shocking piece is not that they did a change, but that the change was so radical.

Kind of leaving me floating disembodied in my private hell of Special Halloween Horrors. And The Unforgiving radically changed into the poppy field. Heavy on keyboards and synthesizers, reminding me of the development The Rasmus went through. And unfortunately so for the latter, I might add. And sometimes even including some House Music elements. Jeez, guys! This is supposed to be Gothic and Symphonic Metal. Or is it, really? Sometimes this sounds like they just had an injection of Amaranthe juice to jack them up.

And don’t get me wrong: Within Temptation already changed track in the past. For example the shift from Mother Earth to The Silent Force was simply remarkable. But also remarkably well executed. Kind of seamlessly leading on to the next stepping stone of progress this band is moving towards.

We need to forget past glories and look at what is really there. And – at that angle – the outcome is actually not all that bad. But it is just plain rock of the mainstream kind. Perhaps a bit faster paced than most, but still.

And we need to give them credit.

The Unforgiving is actually a concept album of sorts, based on a comic book series written by Steven O’Connell (BloodRayne & Dark 48) with comic artist Romano Molenaar (Witchblade, Darkness and X-men) doing the drawing work. Basically a good idea. Or is it?

So, old impressions out the door, what do I see?

The album is well-engineered, sometimes almost too well done. As usual, the soul and savior of the piece is Sharon den Adel with her stellar voice that she is able to modulate so well in different ways. Starting with the intro, which is actually quite good.

Shot in the Dark, In the Middle of the Night (the one with House elements in it) and Faster are all of the same vein. Kind of fast paced, poppy and heavily synthesized creations, with some attempts to reach metal status. And sprinkled with some symphonic elements, but only scarcely so. Pumping up the treble in the hope this may make it sound like metal ain’t making it so.

The tasty ballad Fire and Ice is a neat interlude. And I like this track most, because it is more closely related to the old Within Temptation style than the rest. It is this fire and soul thing that is so sorely missing on the rest of this mighty track list.

A lot of people have lauded Iron to be the center-piece of this album. A whiff of Power Metal, perhaps? In truth one could qualify it like that, if it were issued by a pop band. In terms of rockiness, it would probably qualify. Yet, this will just not do neither. Center-piece, my ass. Yeah, it does sit at the center of the track list. Mid-point, if you will.

Following that one, still remarkable in a geeky way are Sinéad and Lost, the latter of which adds on to the aforementioned ballad.

Reviewing this in 2014, I of course already know about the follow-up album Hydra, of which I am even less fond of. So, this album is kind of a precursor of worse things to come from this band. A pity, folks, but this is the way it is!

I can only hope that future records will find their way back to Gothic and Symphonic Metal stardom. And that Within Temptation will get some spice back into their tune.

I like it crunchy, surprising and – above all – metal laden. This style is amusing for a while, and it can get addictive in a certain way. But it – for sure – will risk to bore you to death with a lot of pop injections after a while.

And this will just not do.