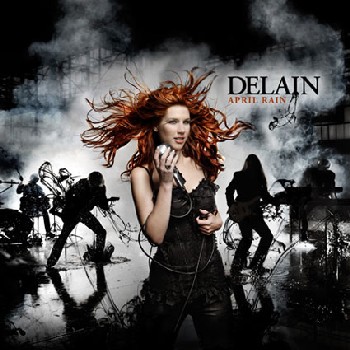 Kind of closely following their late 2006 album Lucidity in style, April Rain, Delain‘s 2009 Symphonic and Gothic Metal concoction, is nevertheless a step up in speed and overall juice.

Nightwish remains a clear influence on this new record, too. The style of which is clearly brought to the forefront by Marco Hietala‘s excellent contribution to this album. As in the track Control The Storm that really takes off, with some typical raw power Marco usually brings to the party. The consequence – however – is that at times the production sounds a bit too much like Nightwish itself. To the point of causing Delain almost losing its identity at some point.

But not to a point that drama would take over and we would have to accuse them of copycat. What mainly saves April Rain from this fate is the lovely Charlotte Wessels. Even if she is not the best singer in this genre with her somewhat flat interpretations of stuff, though. She nevertheless puts a stamp on the album as sure as Sharon den Adel does for Within Temptation. In the end, the album still sports the typical Delain groove that we all learned to love.

Now, the above unfortunately saddles April Rain with a certain predictability. And a (perceived) lack of new, fresh ideas. And this despite the intervention of very talented players from outside of the band. Not a lot of surprises there, and – I daresay – the album could use some more piping-hot spice. Even if some of that stuff – for example in Virtue and Vice – is refreshingly crunchy, growls and all.

The album gets off the ground with the title song April Rain, a track with a promising, but somewhat flat start. But the song seriously takes off, adding more oomph as it moves forward.

Stay Forever seamlessly latches on to the first track, until you get to the solo, that is. It is actually this contribution and Charlotte’s intervention towards mid-point that saves this track from the terrible trapdoor.

Moving further into the album, Lost is noteworthy as well as the ballad Nothing Left. This one sounds like some mix of Nightwish and Within Temptation. Until it suddenly gets hijacked by typical Delain elements.

Finally, April Rain pleases with a renewed freshness and some rock-hard passages. But in the end, Delain presents us with nothing that would rock me out of my corner by the fire to get some headbanging done in the middle of the room. For you people who fancy a softer style, but with a tune still rocky and crafty enough to stand out from the crowd, this is a good record for you.

And don’t get me wrong, April Rain is still a great and juice dripping piece of Gothic and Symphonic Metal. And the main credit goes to Charlotte Wessels, who deserves respect for this delivery.

But the album is also a somewhat no-risk endeavor, not inventing anything new and for sure no step change. Whilst still good, the record would have a use for some more spice.