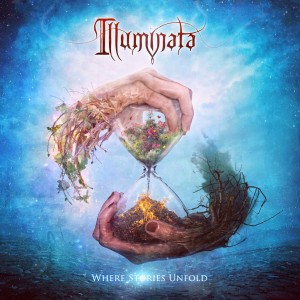 Now step back a minute.

We have drumblasts – check! We have distorted guitars – check! We have a female front – check! Ah, only one? Confused! Symphonic influence – check! So, this must be Gothic Metal – NOPE! Well, kind of nope. It does have all of the trappings of a metal record, but it is for sure not your usual piece of Symphonic Metal.

The Austrian band Illuminata hail from the beautiful city of Graz. You know the one with the funky Kunsthaus and clock tower. And I am floored. Their 2015 album Where Stories Unfold departs to a completely different direction than their last record. When I started on this album, I stopped dead in my tracks: Gone was the rocky and straightforward style, kind of leaning into Within Temptation.

And in comes – what exactly?

This actually sounds like a concept album, a musical of sorts, a movie soundtrack (minus the film). Or some Game of Thrones theme (no pun intended, well almost…). Hollywood greets thou! And a very funky new production this is with a lot of Nightwish type elements thrown into it as well. Some people called the style Cinematic Metal. Whatever the hell that means, for lack of a better description of their style, I guess. The band actually picked that one up and put it on their website. I will for the moment stick with Symphonic Metal or Gothic Metal.

Illuminata changed their line-up to a quintet. Joanna Nieniewska left back in 2012. So, the double female front idea has died a painful death to a single one, now solely represented by Katarzyna Nieniewska. Sometimes backed up by the keyboard artist Sabrina Supan.

Apart from that, the band appears unchanged. But to me this is a real pity. I DID like this little extra of a double female front (actually three female singers with Sabrina). And it had a positive impact on music quality – A World so Cold be my witness.

Where Stories Unfold comes along in a pretty mature robe of Symphonic Metal delights. Illuminata expertly navigated that deadly cliff on which many bands shipwreck on. Which is this urge to become an opera without being one, and driving the friggin’ bombast out through the roof.

In this case and whilst there is a very heavy symphonic influence, Illuminata managed to keep that one in check. And deliver something that is their own. Also, the mastering job appears up to par. At no point in Where Stories Unfold do we lose the vocalists in the sea of many instruments that make up that production.

Illuminata‘s new style is interesting and – in a way – addictive. Even if the guitar solos that true metal heads crave are curiously absent, the whole production is well rounded. However my metal soul is suffers nonetheless. This is not pure metal anymore, but some confused hybrid between metal heaven and operatic hell. But then, this is where its quality lies and the band DOES make a point on their current trademark.

This also renders Where Stories Unfold very controversial. Yet again, very varied, combining different styles moving effortlessly from Symphonic to Gothic Metal. And you will also get some sort of variété/musical style music, then again going full blown Hollywood on me. And sometimes – I gotta say it – this sounds like some Imaginaerum from another time.

It looks like the crowdfunding really worked well and allowed them to get a first-rate orchestra to help them out with the symphonic parts. Much to my relief none of the unspeakable growls that some of the more mediocre Gothic Metal bands like to display erred onto this record. No idiot grumbling away in very bad quality.

The vocalist Katarzyna Nieniewska really excels on Where Stories Unfold. A step up from the former production A World So Cold. She delivers a stellar performance, interpreting the different styles, directions and nuances expertly. And with just enough energy to keep it interesting and not block out the instruments. Not an easy job with these complicated concoctions. Very well done, I am impressed!

Violet’s Compass is excellent work. I like the mix between classical and contemporary instruments and there is a certain amount of rockiness about it. To the extent that this record permits. White Heart and Phoenix serve as the center pieces of the production. Perhaps a bit slow on the metal side. I like them, but you gotta be in the mood for this kind of tune.

Arbitrary Asylum – hmm – first induced some hate, until we found some love. But still to this day, I find it difficult to listen to this track. A very complex production and one where you can hear the boys of this band for a few moment.

The only real failure is Entwined with that ill fated duet with the guest singer Mario Plank (ex Visions of Atlantis). And it is a pity too, the song actually has a good structure, starts well, but then deteriorates. As is often the case, it is somewhat of a difficult call to have a guest singer in the band and this one just don’t fit, guys. Sorry.

And here a few words to Danse Macabre, one of my favorites. Many hate it, many love it – but it is full of variety. Changes of tempi, sometimes rocky, sometimes softer, often musical styles – not bad at all. The Phantom Rickshaw finally adds some Metal to this here selection of tracks.

Wow, many words to describe something that we should be able to do in a few sentences. Where Stories Unfold is very good work. Again not something I indulge in usually (to say the least..). So if this album could hold my attention for so long, this means it is of extensively good quality.

My thanks to Illuminata for keeping true to their own trademark and being authentic. The proof of crowdfunding is in the music. Right?