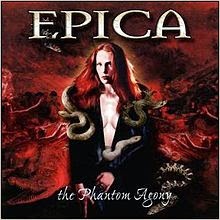 Ah, I am relieved! Just listening to Epica and their June 2003 debut concoction The Phantom Agony. This is a surprising quality and depth for a band so young. Especially after just having reviewed their 2014 Little Booklet of Night Horrors The Quantum Enigma, which was kind of out of control. A real pity by the way. Frankly, I was a little fearful to find something very similar in this record.

Usually I am not too fond of operatic productions. Most of the time, them bands just serve you with too much pretentious and bombastic bullshit to keep a straight face with. But this one is really, REALLY good! Well, well – it is agony indeed, unknown torment to my metal soul, too! There is such a thing like good and well balanced bombast. Who would have thought that.

Mark Jansen founded Epica some time after his departure from After Forever, which – so I understand – did not go too smoothly. To top it, The Phantom Agony is Epica‘s very first studio album ever. And to get such quality from a band the first time around is frankly surprising. Clearly a tribute to the very significant talent that was present then and still is assembled in this band.

Which amazes even more if you look at the average age of the talent in this band at the time of recording. I am really positively surprised and impressed! And guys, this puts this band clearly apart from the totally unimpressive bombastic slop most of these Symphonic or Gothic Metal bands produce. Some of them wanting very much to be a friggin’ opera and completely missing the point.

The style on this album is refreshing, well thought through and innovative. Some of my co-reviewers opine that there are no surprises, all kind of a repeat of the former After Forever style and direction.

But I beg to differ.

Whilst there are some similarities, this is definitely not the same potion. The whole friggin’ genre kind of sounds similar. And THAT is why you always need to look for this ounce of surprise in their tune. It is fucking easy to put a female front on top of a few musicians and then start banging away. The terrible SAVN can attest to that. Good grief!! But in the case of Epica, this is not the case. Luckily.

On the negative side of the equation The Phantom Agony sports these embarrassingly weak growls. Those join the fray from time to time, and just do no good. Then there is an almost complete absence of good, exciting riffs and – Loki forbid – solos. In truth, those should bowl us around our well-rounded music universe some, like some goldfish on steroids. The record also boasts a trifle too much operatic involvement. Too much focus on the choir and classical instruments, whereas I would have wished to get a better metal taste to things at times.

However, it is the overall delivery that is pleasant and nice to listen to. To top it, they released a few stellar videos not only featuring the lead Simone Simons and band, but also Amanda Somerville of Trillium as a background singer. Also, the freshness of this here record blows their latest concoction The Quantum Enigma (the overdone turkey one) of 2014 straight out of the water, no contest there.

A lot of thought also went into the lyrics, dealing with issues that were on the menu back in the early Y2K. September 11, manipulations in religion – you name it, most of which still of increasing actuality today. The slow ballad Run for a Fall is – so the story goes – a vicious sidekick towards Floor Jansen (then After Forever, now Nightwish). Mark and Floor made up again later and she ended up singing some lyrics on Mark’s ‘MaYan’ project.

Cry for the Moon and The Phantom Agony are just stellar tracks, expertly delivered, very well executed. I like Seif al Din (the sword of faith) for the simple fact that they change to oriental style, but still wonder which one of the many Sayfs (LOL- get my drift..) they make allusion to. Or do they just lament blind adherence to religious faith? Too much intellectual context there. Triumph of Defeat also gets a score of brownie points, by the way.

To conclude, The Phantom Agony is a complex production and is not very easily digestible. Pretty heavy throughout, you need to work yourself into the groove. Listen to it a few (I mean many) times to get somewhere with this. But once you do, this is a great record with some real depth to it.

Very complex and well (almost too well) thought through, and with a lot of lateral width to boot. It is almost as if a few very intelligent, but out of control student thinkers produced something that is almost too complex for people to take on board easily. Apart from very alluring melodies and stellar quality delivery of the tunes, of course. As a debut album goes, Epica created a prime record. To say the least.

Looking for a good cover? Here is one for Sensorium.